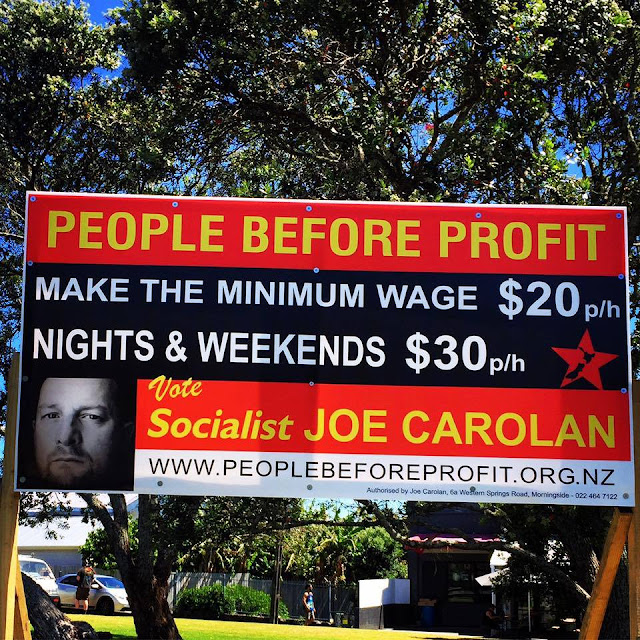 The following demands were agreed upon prior to Joe Carolan standing as a candidate in the February 2017 Mt. Albert by-election under the banner of 'Socialist - People Before Profit.'

1.  Make the Minimum Wage a Living Wage of $20 Per Hour
Reintroduce penal rates for the weekends – $30 minimum per hour for nightshifts and weekends.

3.  Free Education for All
Stop inter-generational theft of a political class that benefited from state funded tertiary education. Cancel all student debt now.

4.  Free Public Transport- No more new road or motorway building. Use the savings to get 1,000 new electric buses for Auckland that are 24/7, free and frequent. Extend rail to the airport. System change not climate change.

5.  No More Corporate-led Globalisation
Unequivocally reject the TPPA and any proposed successor. Globalise environmental and labour rights – Workers of the World Unite!

6.  Abolish the WINZ regime and unemployment with solidarity centres and a liveable, universal basic income. Empower the community. Fund Playcentres, Eco Neighbourhoods, community art projects – allow young people to work in social schemes that benefit them and their neighbourhoods.

7.  End the War on Drugs
Decriminalise. Fight poverty to fight the P epidemic.
Provide free rehabilitation to those addicted to drugs

8.  Fight Racism and Exploitation
Migrants and refugees are welcome here.
Stop the deportations – amnesty for the Indian students.
Double the refugee quota instantly – take 10,000 refugees as soon as possible.

9.  Cut Politicians' Pay
Put them on the average wage and see how quickly the world will change. Abolish CCOs (Council Controlled Organisations) in Auckland. Put our port, transport and other resources under genuine community, democratic control.

10.  Tax the Rich to Pay For It
Abolish secondary tax and GST. Fund it through a Robin Hood tax. Taxing all financial transactions at 1%.