This is a community not a Monopoly board- Defend Niki from eviction. 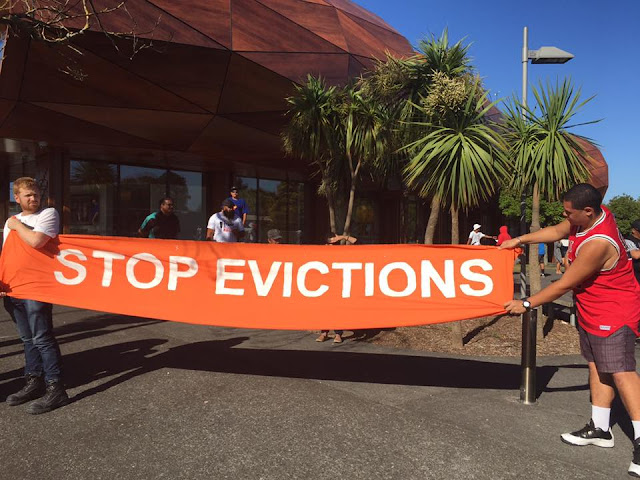 The Nats may still be in power … but yesterday in Glen Innes it was the people who owned the streets. Hundreds of protestors waving banners with ‘Stop the Evictions’ and chanting ‘Stop the War on the Poor!!” marched through the suburb to protest the eviction notice served on Niki Rauti, who is being forced to leave her state home of over 30 years. Two marches, one coming from Tamaki Road and the other leaving from outside the library on Line Road, converged outside Niki’s Taniwha Street home to lend their support and express their anger at the dismantling of state housing under National. Unions, local residents and housing groups were among those united in opposition to the relocation plan.

Shouts of ‘shame!!!’ went upas Niki apologised for not being on the protest for fear they would ‘change the locks’ on her house in her absence.
Speakers emphasised this was just the beginning; some protestors remained to occupy the property, and a telephone contact list was established to summon support at short notice should any attempt be made to physically remove Niki from her home.

In October the Tamaki Regeneration Company (TRC) handed Niki a 90-day eviction notice to leave her two-bedroom home. The TRC, a housing development company jointly owned by the Government and Auckland Council, has targeted 2800 state houses to be replaced with new homes over the next 15 years. The government says the move will help ease the housing crisis, but the Tamaki Housing Group  argues that the land is being given to developers who are land banking on empty homes while homelessness increases. It says many of the new homes are being sold for over $800,000 and that house prices in the area have increased from $400,000 to $960,000 since the redevelopment began.

The whole scheme smacks of the social cleansing that is happening throughout Auckland, as rising house prices and spiralling rents edge working class families out of their communities to make way for the wealthy. It’s also symptomatic of an ever increasing social divide, in everything from wages to education. Just two days ago, Oxfam released research showing the richest 1 per cent of Kiwis have 20 per cent of the wealth in New Zealand, with 90 per cent of the population owning less than half of the country's wealth. Meanwhile ordinary Kiwis – from the elderly and vulnerable like Niki to nurses, teachers and retail workers – are struggling to survive on benefits and low wages that are eaten up by rocketing rents.

The march may have been focused on No 14 Taniwha Street, but its importance goes far beyond the situation in Tamaki. It’s about working people, ordinary Kiwi families drawing a line in the sand and saying ‘enough’. The housing crisis won’t be solved by shifting people like Niki from ‘prime real estate’ and sowing insecurity and instability among established communities. What is needed is a massive state house building programme combined with a minimum wage that is a living wage. Unions Auckland Housing Committee Chair Joe Carolan commented after the march: "We need rent controls and decent, healthy affordable accommodation for workers. The main way we can control rents is to flood the market with 100,000 new state houses. We also need an empty house tax of $3,000 a week, to force the owners of Auckland's 33,000 ghost houses to immediately help shelter our people living in cars, garages or the streets."

A sign outside Niki’s home reading ‘This is a community not a Monopoly board’ really summed up what 2017 is shaping up to be about:. People before profit.
Bring it on.