Recently around the country, mostly in Auckland, a peaceful protest movement called Park Up For Homes is growing and spreading. Organised by community members in conjunction with Child Poverty Action Group, the protest is about the complete inaction by the government to provide warm, dry, safe and affordable homes for the most venerable in our society. As a result of their inaction more people are homeless and sleeping in cars and many more people having 15+ people living in one 3-bedroom house as private rentals are becoming unaffordable for many. So the general public are coming out in support by sleeping in their cars overnight to show their solidarity for the people who this is a constant sad reality for. Hundreds have turned up at each protest.
So far we have seen protest action in Otara, Mangere, Onehunga, Henderson, outside of parliament and protests also being planned for Hamilton and Napier. A few politicians have come out to give a speech and show support. The most frequent being Marama Davison from the Green Party. Park up Onehunga even had world renown boxing great David Tua showing his support.
What has caused this? Wages over the last 30 years have not kept up with the cost of living and inflation, we have a housing market which is a “free for all” for investors buying up houses and leaving them sitting empty due to excessive capital gains being made in short periods of time. We have over 33,000 empty homes in Auckland alone. We have a housing shortage in Auckland of approx. 40,000 homes.
An uncontrolled thirst for property ownership caused by successive capitalist governments only serving the interests of the rich with their neo-liberal policies for the last 30 years are fuelling this crisis. The current government is so pre-occupied in selling of state housing to private developers in the middle of this shortage to serve the own selfish and inhuman ideology.
The National party has proposed giving out $1b in loans to councils for infrastructure which is really only going to be going to rich private developers. Labour has reached out further announcing it would build 100,000 homes, 50,000 in Auckland and at least 10,000 homes each year nationwide. Whilst this is definitely an improvement, it does not go far enough to stop housing from being an investment option. With Labour saying that an affordable house is going to be approximately $600,000. Even someone on $70,000 annual salary wouldn’t be able to service a $500,000 home loan, neverlone a $600,000 one. And what would you even get for $600,000 in Auckland anyway? And to top this off, neither party has mentioned anything about rental control.
Average rental prices are over $500 per week in Auckland. To move in you’re going to need at least $2,500 in bond and advance rent. How’s someone on minimum wage of $15.25 going to afford the rent, never lone the bond to get it? “Too bad!” according to our two main political parties.


Socialists and community activists must keep the pressure on our capitalist government to ensure that as much attention as possible can be brought to this monstrosity of an issue in hope that people power will prevail and we’ll get some real action. People before profit all the way. 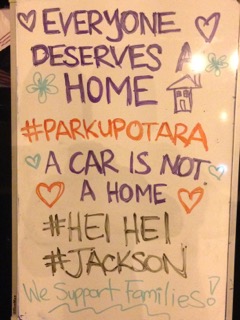