Showing posts from August, 2016
Show all

Don't Block our dreams-homes for people not profit 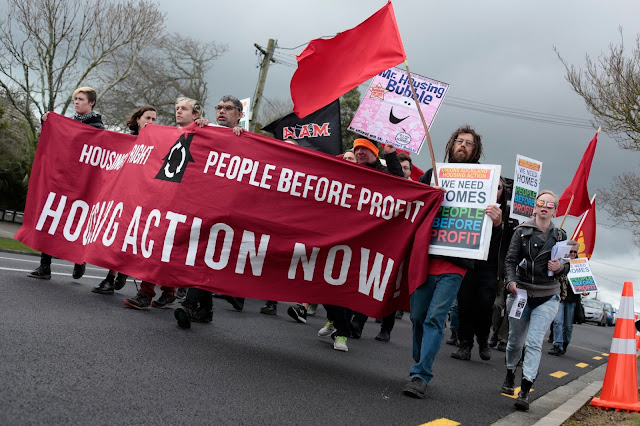 "There is something deeply morally wrong about a small minority in our society making huge profits from non-productive speculation, setting the economy up for a crash, whilst hard working people struggle to keep up with rack renting, never mind never being able to afford their own home," he says. "Unions have had enough of this, and we are going to build a movement to solve this problem like we did in the 1930s."- Joe Carolan, Unite Union. Ben Peterson, Unions Auckland Housing Action Committee Mike Treen, National Director of Unite Union For Sale ? For Living ? Who destroys our dreams ?
Post a Comment
Read more

Recently around the country, mostly in Auckland, a peaceful protest movement called Park Up For Homes is growing and spreading. Organised by community members in conjunction with Child Poverty Action Group, the protest is about the complete inaction by the government to provide warm, dry, safe and affordable homes for the most venerable in our society. As a result of their inaction more people are homeless and sleeping in cars and many more people having 15+ people living in one 3-bedroom house as private rentals are becoming unaffordable for many. So the general public are coming out in support by sleeping in their cars overnight to show their solidarity for the people who this is a constant sad reality for. Hundreds have turned up at each protest. So far we have seen protest action in Otara, Mangere, Onehunga, Henderson, outside of parliament and protests also being planned for Hamilton and Napier. A few politicians have come out to give a speech and show support. The most
Post a Comment
Read more
More posts