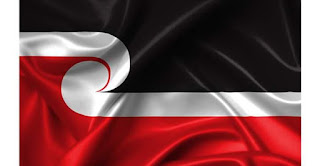 As an Irish Kiwi, I could never be represented by a flag with that Butcher's Apron in the corner. It flew over Ireland when British imperialism put our people through a Late Victorian Holocaust, a famine genocide where millions died and millions more were dispersed through diaspora. The origins of the Irish community in Aotearoa and Australia spring from that trauma. The Butcher's Apron was flown by State forces that crushed the revolutions of 1798, 1848 and 1916, and flew over my head as we endured the military occupation and repression in the North of Ireland through thirty years of deathsquads , civil rights violations and slaughter some call "Troubles". The flag that makes my heart rise in Aotearoa is the red, white and black of the Tino rangatiratanga of the Maori people, and the red flag of the international working class. The red on both of these flags has a deeper spiritual symbolism than the blood that the Butcher's Apron is soaked in forever.