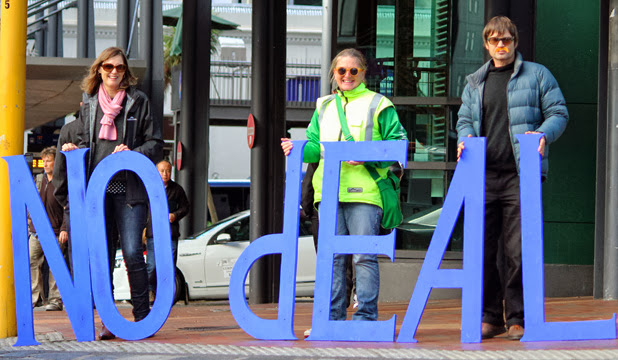 It's gone from bad to worse for John Key's shaky coalition government. The ministerial resignation of John Banks this week, triggered by Graham McCready's private prosecution is a blow to the Nats. It's also a surprising example of people power. How one pissed off bloke can take on the corruption of the politicians and the double standard of the police and win.

With Banks set to stand trial mid-2014 and the law change to enable John Key's pokies-for-convention-centre SkyCity deal set to become law before the end of the year, the issue will continue to be a weeping wound point for government support.

One of the interesting things about the SkyCity deal is that public opinion is fluid over it. As Brian Rudman pointed out in July 2013,


The latest Herald-Digipoll survey shows 61.5 per cent of voters disapprove of the deal and only 33.8 per cent approve. That was a sharp turnaround from a year ago when a similar poll found 40.3 per cent disapproved and 57.3 supported it.

That support will likely drop as Banks heads to court and the deal gets more scrutiny as it heads back before Parliament. Like the GCSB issue, the more the public finds out, the more pissed off they will be.

It's widely accepted that 230 extra pokies will create around another 200 problem gamblers in 'the supercity of sin', as Winston Peters called it. And the promised jobs in the convention centre will be more of the same low pay, no guaranteed hours jobs that SkyCity's convention staff join the Unite Union in droves to fight.

Churches, unions, community groups and the political parties of the opposition all have a vested interest in taking on the deal. A big demonstration in mid-November with a march on SkyCity will provide some political form to the intellectual content of the debate to be held over the next few months.

It may also be a good chance to catch out the Conservative Party. Colin Craig's stars are lining up for a clear run at a seat in 2014 and with the 2.65% he got in 2011 plus whatever remnant Act Party (or Pakeha Party or United Future) support he can muster as he prepares to fight the election on Treaty issues and a hard line law and order stance he could be pivotal to a third-term National government. But would he jeopardize his run to take a conservative stand against Key's rotten state on a moral issue? Now's the time to find out.

As the political stability of Town Hall and Beehive melts in the late Spring heat, it's probably time for the Aotearoa is Not for Sale coalition backed this time by churches, charities and gambling watchdogs to take the streets once more and say our city and our gambling laws are not for sale.