We’re all Brazilian in this Struggle 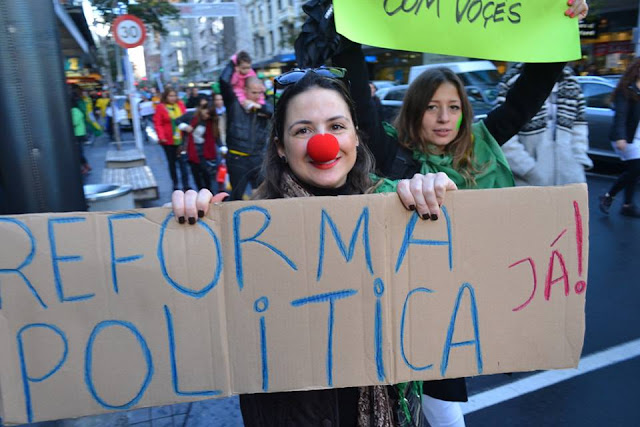 Saturday the 22nd of June was a typical winter Auckland afternoon with beautiful blue skies, frequent showers, howling wind, overcast conditions, and at moments a combination of all four. To be quite honest it felt pretty far removed from the images we are used to seeing of beaches, thongs, football, and parties that have become the western perception of Brazil. But on this typically Auckland day the Brazilian community of Auckland came out in force to demonstrate their anger and frustrations against the ongoing corruption, exploitation, and police brutality that has come to define the capitalist legacy of Latin America’s largest nation, and future torch bearer for corporate mega events, the World Cup and of course the financial black hole that is the Olympic Games.

Brazilians and their supporters worldwide have been coming together in solidarity against the vicious police repression, and ongoing media myths that permeate most discussions regarding the actions currently being undertaken in Brazil. Tired of hearing the same mainstream media storylines repeated day in and day out that it is only a few thuggish Brazilians who are violently revolting, and that this whole issue is because of a 20c rise in public transport costs (so that Brazilians can be dehumanised and sound absolutely pathetic compared to those in the West who consider 20c not worth picking up off the ground), the 3000 odd voices in Albert Park and Queen Street made it clear that this fiction was belittling, frustrating, and that the current neo-liberal capitalist regime had to go. Talking to the many demonstrators and marchers it was clear that most felt change was needed in a country where the World Cup and the Olympics have become convenient scapegoats for rampant corruption, theft, and repression in a society where teachers get paid approximately $500(NZD) per month, hospitals are completely broke, costs keep rising, and joining in the Sao Paulo and Rio de Janeiro gang culture is one of the only ways out of starvation for many young Brazilians born into slums devoid of hope, work, and any chance to raise themselves out of the grim prospects that neo-liberal capitalism has assigned them to. 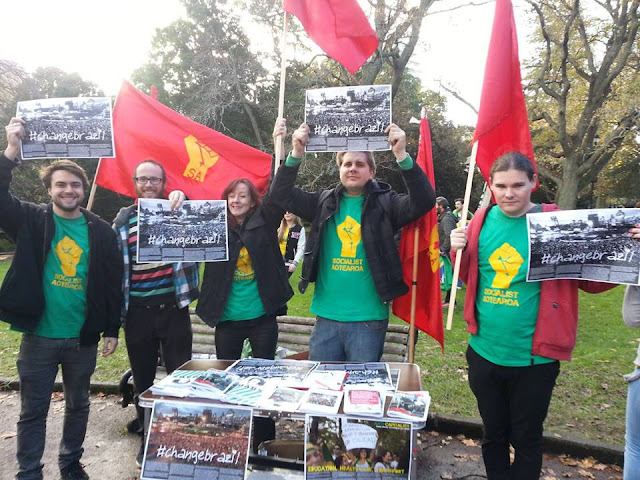 This is not to say that this was a socialist march per se, as there was a distinct flavour of nationalism permeating the crowd. This was to be expected – after all this was a demonstration a long way from Rio or Sao Paulo, and a lot of the crowd were middle class and fortunate enough to be able to afford to travel to New Zealand, whereas most of the working or unemployed oppressed in Brazil obviously have very limited options when it comes to escaping their lot under this current system in Brazil alone, let alone internationally. They are the ones at ground zero, mixing the sugar into the Molotov Cocktails so that they stick to their targets, and improvising tear gas masks out of plastic bottles so that they can continue to fight in the face of brutal and ongoing police oppression.

But more importantly than this superficial division, this nationalism represented the wide ranging frustrations amongst many people particularly on the left, that the Partido dos Trabalhadore (the Brazilian Worker’s Party) had completely and utterly sold them out and let them down as they integrated themselves into capitalist democracy. Starting as a radical grassroots organisation in the early 1980s, continued electoral success (indicating a wide ranging belief and support in socialist and radical revolutionary policies amongst Brazilians at a time when New Zealand politicians were praising Milton Friedman with the religiosity and fanaticism of Brian Tamaki) watered down the PT to the point where they are now part of the problem in many people’s eyes. Internal struggles and conflicts over the direction of the party led to it openly embracing a centre left moderate philosophy and joining the mainstream during the 1990s. Combined with a 2006 election scandal, and the state of affairs in Brazil today, significant portions of the crowd understandably felt that their Worker’s party was essentially ‘more of the same’ – a feeling all too familiar for any traditional Labour supporters in New Zealand and the UK who saw their party’s proud working class and union roots, trampled in the rush for a quick dollar in this ongoing neo-liberal orgy that started in the late 1970s. This led to some at times slightly heated discussions with certain marchers who felt that the demonstration was not in fact political, but more a nationalist celebration of sorts. But overall there were no real problems, and most Brazilians I spoke to were grateful and truly touched by the show of solidarity from the New Zealand marchers, who for this one day were all Brazilian in spirit. 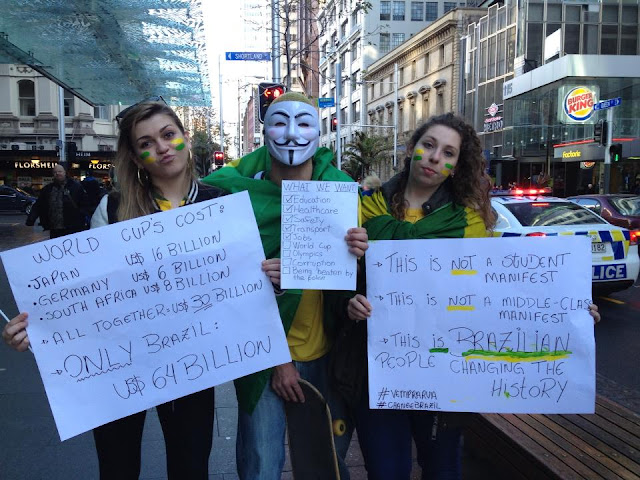 The rise against capitalism is kicking off worldwide. We have seen the Arab Spring, the fall of Europe, the rise of radicalism in the UK, the death of the Republicans in the USA (although in fairness only to be replaced with the Republican-lite Democrats), the fighting spirit of the people in Istanbul, and now Latin America is heaving under the anger at what the inhumane damage the very few have done to the very many in such a short space of time. The North American corporate oppression in Latin America could only be hidden for so long, and the tide is beginning to turn. We are united with our friends and allies in these battles, and we support them wholeheartedly in their struggle to take their country back from the thieves and liars that have done their best to destroy the working classes, and institute their form of modern slavery on the masses. We will be there supporting you the whole way, and as I said before, we are all Brazilian in this battle.