Russell Brand - A Marxist for his time? 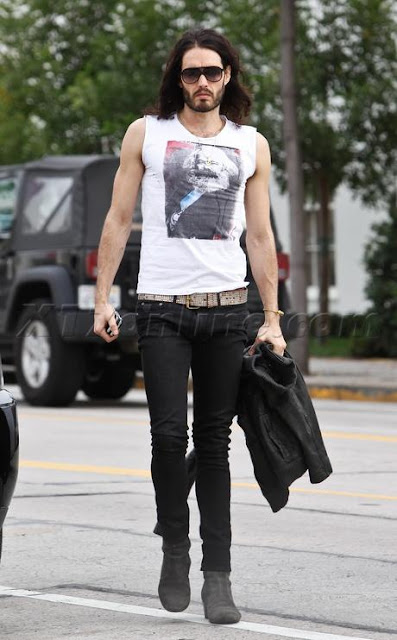 Russell Brand. He wants the bankers to go to jail. He wants Bradley Manning out of jail. He rocks up to basketball games with Marx's famous, “Workers of the world, unite! You have nothing to lose but your chains” scrawled on his arm just to see if paparazzi will make it go around the world.


Brand, alongside being a irreverent comic is also a passionate political activist, joining anti-capitalist demonstrations in London, protesting Israel's siege of Gaza, and during the Queen's Diamond Jubilee issued a call for a bloody revolution - 'It only takes one to chop off someone's head.'


The sincere aspect of my attendance to these carnivals of disobedience is my instinctive mistrust of authority and innate belief that whilst we are different we are all equal and have a social culpability to care for every member of our society. That, ultimately we are one, that separation is an illusion and that none of us can be content as long as there is neglect and suffering among the weaker of our number.

Capitalism has failed us. All of us, even people who’ve recently become well off, like me. The system has failed because it’s created disparity and discontent because it is devouring the planet. It is irresponsible and unaccountable and it will forever cyclically fail so we need to look at an alternative.

I’m sure you won’t be astonished to learn that I, Russell Brand, the stand-up comedian have not dreamt up a viable replacement for the Free Market between gigs and joyless trysts but I know all over the world, in the face of incredible obstruction and resistance, people are inaugurating economic systems that are founded on fairness and egalitarianism. Worker run factories, villages without currency and even in Blighty, council estates bulk buying shopping to make benefits go further.


Russell Brand may have once been married to Katy Perry, he may be too outrageous and in-yer-face for some, but when he said, on BBC's Question Time two weeks ago, to a cheering studio audience that politicians exist solely to protect the interests of the rich and powerful and calls for the rich to pay more tax and a society organised for people not profit then it seems that more and more Brand really is a Marxist for his time.