Making sense of The Pakeha Party 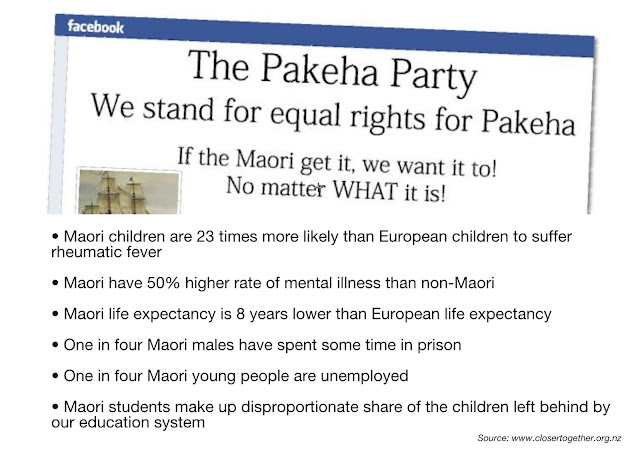 In just a day of publicity the Pakeha Party has achieved over 42,000 likes on Facebook giving it a greater social media reach than the combined forces of all other New Zealand political parties.

Left-wing political commentators have been quick to heap scorn on the Pakeha Party and its followers.

Martyn Bradbury pulls no punches in his description,


It’s a mumbo jumbo swamp of unenlightened inexperience mixed with garden variety bigotry and a sprinkling of ZB reactionary knee jerks. In the credit bubble so many Gen Y grew up in, political awareness was parked for a yearly playstation upgrade paid for on Mum and Dad’s bloated housing valuations. The lack of struggle creates a lack of critical awareness and if you want a voyage into the damned, just read the comments section on The Pakeha Party’s facebook page.

It’s a like a frontal lobotomy minus the charm. I think the technical term is a Troll feast, this site manages to make Whaleoil look like a reasonable, compassionate and informed humanitarian.

Other leftists have been quick to loudly denounce the page's inherent racism and a People against the Pakeha Party now has nearly 1500 likes on Facebook.

Yet the Pakeha Party is not just a social media-supercharged racism meme, it is an incoherent and inarticulate but deliberate response of thousands of white, working class New Zealanders to the decline of class politics, the ineffectiveness of the Labour Party and the success of the MANA Movement.

The decline of class politics
Identity politics, or shared political culture based on the shared race, gender or sexuality of people has been rising for the last thirty years. This has dovetailed in New Zealand neatly with the capitulation of the Labour Party, the historic party of working-class politics to a neo-liberal policy paradigm in 1984 and the effective kneecapping of the trade union movement via the Employment Contracts Act in 1991.

There have always been counter-posed forces to identity politics. The Alliance in its heyday 1993-9 represented a countervailing tendency to identity politics. The Alliance was just that, an alliance of political parties united to fight neo-liberalism. At its core however it unified the struggles of oppressed people. One of its component parties, the NewLabour Party, was committed to full gender equality. Another of its components was Mana Motuhake , a precursor of the Maori and Mana parties.

After the election of the Fifth Labour Government in 1999 and the breakup of the Alliance post-2002, identity politics reasserted itself. Firstly, it reasserted itself in the formation of the Maori Party in 2004 when Maori political activists came together in a united front to oppose the raupatu of the foreshore and seabed. Secondly, it reasserted itself, albeit in a severely distorted way, through the Don Brash-led backlash to what National spun as Maori attempting to block Pakeha access to the beach.

The re-election of Helen Clark and Labour in 2005 and the downfall of Don Brash as National's leader curtailed the continued rise of race-based identity politics after 2005. The 2008 economic crash and the re-election of John Key's austerity government catalysed another splintering of race-based identity politics when Te Tai Tokerau MP Hone Harawira left the Maori Party and formed with prominent Pakeha left-wingers Sue Bradford and John Minto, the MANA Movement. Yet MANA, for a number of reasons, has yet to win a serious following outside of Maoridom.

The transformation of Labour
The fall of class politics has also transformed the Labour Party, as Bryce Edwards has recently noted,


Historically, Labour has been the party of workers. More recently, it's become focused on 'identity politics' - i.e. the ethnicity, gender, sexuality and other individual qualities of people. 'The personal is political' is the slogan. This focus is indicative of the 'social liberal' orientation of Labour's now more middle-income MPs and members.

This transformation and the general inability of the Labour Party to cohere itself as an effective parliamentary opposition to John Key and the Nats has left been working-class white people without a voice that they feel represents them in politics. One blogger noted exactly this in his response to Bradbury's post,


Thanks to my English/Arts university degrees, for years I have survived by working off and on in working-class and minimum wage jobs. Most of my coworkers, acquaintances and friends have been working-class and/or poor White/ European New Zealanders.

I have been blessed with their friendships, good humor, compassion and generosity over the years. Through my interactions with White New Zealanders I have also noticed the demons that plague their lives– economic hardships, social marginalization, health problems and depression, drug and alcohol addiction, troubles with the law and police etc. I have seen White marginalization and White poverty up and close. I have seen White children and youth suffer the tragic consequences of long-term poverty.

Yet, “White” isn’t a race or ethnicity that warrants special attention by most political parties. Anyone talking about “White” rights and social justice that focuses of “White people” is either mocked or called Racist.

Ikaroa-Rawhiti By-Election - The spark for the Pakeha Party
June 2013 saw the Ikaroa-Rawhiti by-election being played out across the East Cost of the North Island and through the country's mediascape. The by-election brought Maori issues to the political forefront and showcased the diversity and strength of political voices for Maori - Maori Party, MANA, Labour and the Greens. Yet when MANA released a new component to its housing policy during the by-election, which was just a proposal to revive the pre-1989 Maori Affairs Housing Scheme, the Auckland based David Ruck was spurred into creating the Pakeha Party and its three sentence manifesto, "We stand for equal rights for Pakeha. If the Maori get it, we want it too! No matter what it is."  Correctly Ruck had seen the success of MANA in fighting for housing rights but incorrectly he had seen MANA as a force only for Maori.

Never mind that Hone Harawira was quick to assure the media that MANA's policy would be 'open to all New Zealanders.' It was too late - the Pakeha Party had been born.

Rethinking the Pakeha Party
The Pakeha Party has attracted a Facebook community that equals about 2% of the total amount of New Zealanders who voted in 2011. According to Facebook stats the most numerous demographic liking are young people from Christchurch. The Pakeha Party and their leader seem too incompetent, too moronic and too naive to have any effect in the near future. However the causes of the Pakeha Party's success; the rise of identity politics, the decline of class consciousness, the transformation of Labour and the perceived abandonment of the white working-class; are here to stay. In 2005 Don Brash was able to manipulate these forces to bring his racist, neo-liberal politics to within a whisker of government, today David Ruck seems genuinely confused as to what he has actually managed to unleash upon the social media body politic. Tomorrow, if the radical left does not get its act together, it could very well be a much more effective and thus worrying populist, far-right group that taps this potential. The rise of the fascist far-right in Europe and the Tea Party neo-liberals in the US are testament to the current potential for the growth of right-wing social movements.

For those in MANA the Minto for Mayor campaign represents a timely opportunity to win a segment of the Auckland working-class (Pakeha, Maori, Asian and Pasifika) to the politics and vision of MANA and away from the incoherent mutterings of the Pakeha Party.

Dave said…
Bravo Omar, the hyperbolic screeching of the left have certainly failed, and more worryingly not even tried to engage in a rational analysis of the pakeha party or the historic events leading to its creation.
I like you, I suspect from this article. Think their is a genuine outpouring of discontent at the coreofmthe pakeha party. But the moronic leadership, unaware of what they have are in a dire position of losing their leadership to the far right.
We must show that their are political parties willing to fight against the exploitation and impoverishment of all, in order to correctly harness this political energy. A party of class politics. Mana must be that party.
5:18 PM