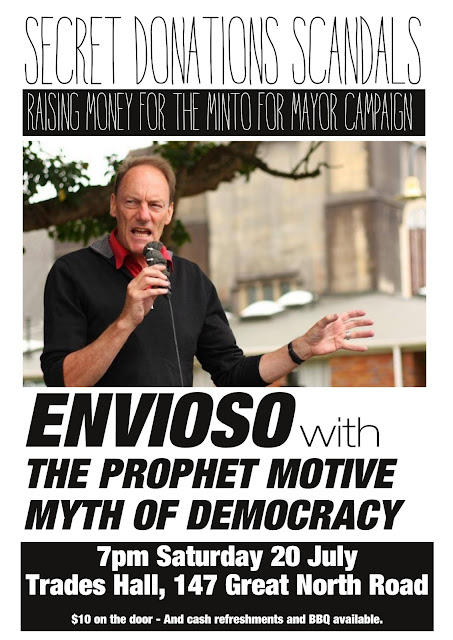 We set up a secret late night dinner with SkyCity execs to stitch up campaign finance but it all fell through when Minto refused to give up on his hammer the pokies campaign.

Then we went door knocking in Remuera with a bucket but they still feel hurt about John calling them all rich pricks.

So we hit up our property developer mates but we couldn't get Minto to agree to support their Glen Innes mansions for millionaires scheme.

And when we asked him if he had any cash Minto told us gave all his money away in the 1980s to some terrorist gang led by a dude called Nelson.

But we need cash for billboards and pamphlets. So eventually we roped in the Mana Movements own Envioso, pulled in some radical folk punkers from Rotorua, The Prophet Motive and filled out the line up with Aotearoa's own Tom Morello - Myth of Democracy.

Paul Brown, Scotland's finest folk export to Aotearoa joins the bill as well to warm up the audience with only the finest revolutionary anthems.

So we'll see you on Saturday 20 July after 7pm at the Aucklands Trades Hall, 147 Great North Road.

This is the most affordable politician you'll buy all year. See you there whanau.

Organised by the Secret Donations Scandals department of Socialist Aotearoa.