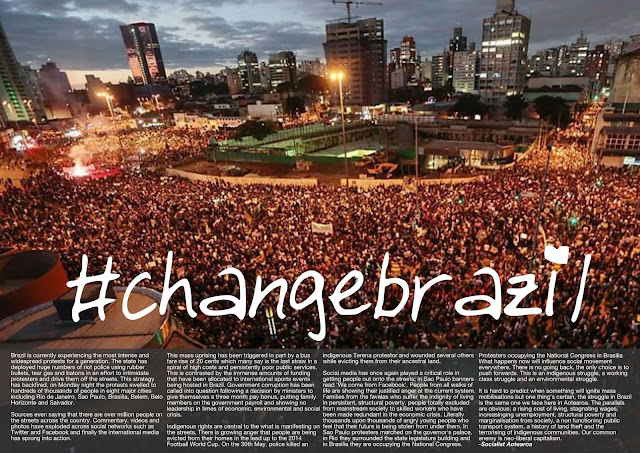 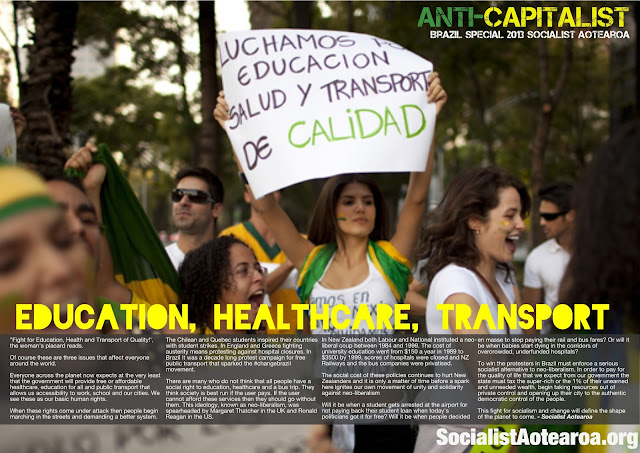 "Fight for Education, Health and Transport of Quality!', the woman's placard reads.

Of course these are three issues that affect everyone around the world.

Everyone across the planet now expects at the very least that the government will provide free or affordable healthcare, education for all and public transport that allows us accessibility to work, school and our cities. We see these as our basic human rights.

When these rights come under attack then people begin marching in the streets and demanding a better system. The Chilean and Quebec students inspired their countries with student strikes. In England and Greece fighting austerity means protesting against hospital closures. In Brazil it was a decade long protest campaign for free public transport that sparked the #changebrazil movement.

There are many who do not think that all people have a social right to education, healthcare and a bus trip. They think society is best run if the user pays. If the user cannot afford these services then they should go without them. This ideology, known as neo-liberalism, was spearheaded by Margaret Thatcher in the UK and Ronald Reagan in the US.

In New Zealand both Labour and National instituted a neo-liberal coup between 1984 and 1999. The cost of university education went from $150 a year in 1989 to $3500 by 1999, scores of hospitals were closed and NZ Railways and the bus companies were privatised.

Will it be when a student gets arrested at the airport for not paying back their student loan when today's politicians got it for free? Will it be when people decided en masse to stop paying their rail and bus fares? Or will it be when babies start dying in the corridors of overcrowded, underfunded hospitals?

To win the protesters in Brazil must enforce a serious socialist alternative to neo-liberalism. In order to pay for the quality of life that we expect from our government the state must tax the super-rich or the 1% of their unearned and unneeded wealth, begin taking resources out of private control and opening up their city to the authentic democratic control of the people.

This fight for socialism and change will define the shape of the planet to come.