Istanbul is not for sale 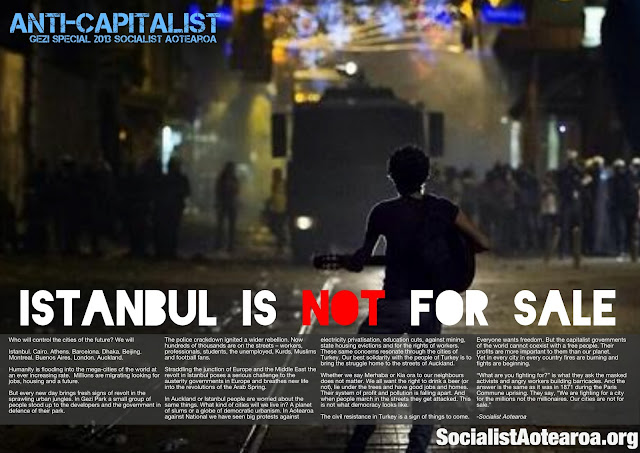 Who will control the cities of the future? We will.

Humanity is flooding into the mega-cities of the world at an ever increasing rate. Millions are migrating looking for jobs, housing and a future.

But every new day brings fresh signs of revolt in the sprawling urban jungles. In Gezi Park a small group of people stood up to the developers and the government in defence of their park.

The police crackdown ignited a wider rebellion. Now hundreds of thousands are on the streets – workers, professionals, students, the unemployed, Kurds, Muslims and football fans.

Straddling the junction of Europe and the Middle East the revolt in Istanbul poses a serious challenge to the austerity governments in Europe and breathes new life into the revolutions of the Arab Spring.

In Auckland or Istanbul people are worried about the same things. What kind of cities will we live in? A planet of slums or a globe of democratic urbanism. In Aotearoa against National we have seen big protests against electricity privatisation, education cuts, against mining, state housing evictions and for the rights of workers.

These same concerns resonate through the cities of Turkey. Our best solidarity with the people of Turkey is to bring the struggle home to the streets of Auckland.

Whether we say Merhaba or Kia ora to our neighbours does not matter. We all want the right to drink a beer (or not), lie under the trees and have good jobs and homes.

Their system of profit and pollution is falling apart. And when people march in the streets they get attacked. This is not what democracy looks like.

The civil resistance in Turkey is a sign of things to come. Everyone wants freedom. But the capitalist governments of the world cannot coexist with a free people. Their profits are more important to them than our planet.

Yet in every city in every country fires are burning and fights are beginning.

“What are you fighting for?” is what they ask the masked activists and angry workers building barricades. And the answer is the same as it was in 1871 during the Paris Commune uprising. They say, "We are fighting for a city for the millions not the millionaires. Our cities are not for sale." 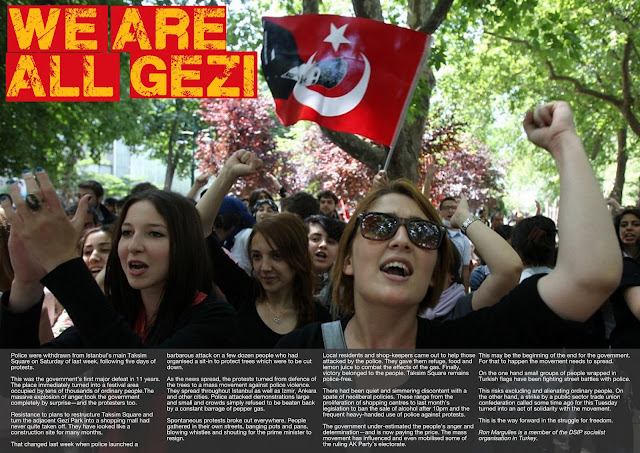 This was the government’s first major defeat in 11 years. The place immediately turned into a festival area occupied by tens of thousands of ordinary people. The massive explosion of anger took the government completely by surprise—and the protesters too.

Resistance to plans to restructure Taksim Square and turn the adjacent Gezi Park into a shopping mall had never quite taken off. They have looked like a construction site for many months.

That changed last week when police launched a barbarous attack on a few dozen people who had organised a sit-in to protect trees which were to be cut down.

As the news spread, the protests turned from defence of the trees to a mass movement against police violence. They spread throughout Istanbul as well as Izmir, Ankara and other cities. Police attacked demonstrations large and small and crowds simply refused to be beaten back by a constant barrage of pepper gas.

Spontaneous protests broke out everywhere. People gathered in their own streets, banging pots and pans, blowing whistles and shouting for the prime minister to resign.

Local residents and shop-keepers came out to help those attacked by the police. They gave them refuge, food and lemon juice to combat the effects of the gas. Victory Finally, victory belonged to the people.

Taksim Square had remained police-free for days. There had been quiet and simmering discontent with a spate of neoliberal policies. These range from the proliferation of shopping centres to last month’s legislation to ban the sale of alcohol after 10pm and the frequent heavy-handed use of police against protests.

The government under-estimated the people’s anger and determination—and is now paying the price. The mass movement has influenced and even mobilised some of the ruling AK Party’s electorate.

This may be the beginning of the end for the government. For that to happen the movement needs to spread, rather than become limited.

On the one hand small groups of people wrapped in Turkish flags have been fighting street battles with police. This risks excluding and alienating ordinary people.

On the other hand, a strike by a public sector trade union confederation called some time ago for this Tuesday turned into an act of solidarity with the movement. This is the way forward in the struggle for freedom.