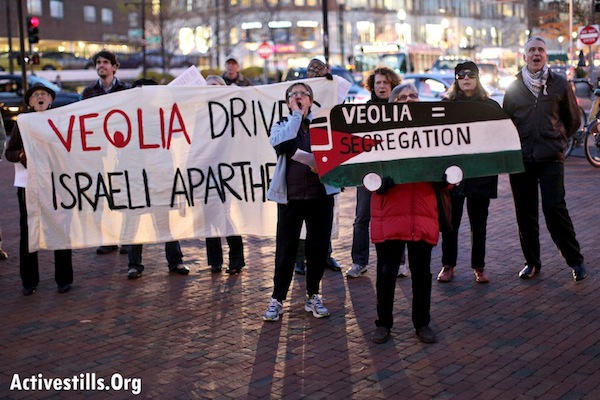 In the Arabic language Nakba means catastrophe. Nakba Day is marked by Palestinians every year on 15 May and remembers the 1948 war and the creation of the state of Israel which has left millions of Palestinians as refugees.

It is a day for resistance and protest and continuing the struggle for peace and justice in Palestine.

In 2011 on Nakba Day protesters, many Palestinian refugees spurred by the Arab Spring and the revolutions in the Middle East marched tens of thousands strong to the Israeli borders with Syria, Lebanon and the West Bank.

This year a demonstration organised as part of the international campaign of Boycott, Divestment and Sanctions against Israel will take place in Auckland targeting Veolia Transport.

Veolia Transport, in a French multi-national corporation which was awarded a contract to run Auckland's rail network on behalf of the council.

John Minto of Global Peace and Justice Auckland (GPJA) has written to Auckland Transport on behalf of the BDS campaign asking for them to break their contract with Veolia. In a letter, Minto wrote,


Our purpose in writing to you is to formally request Auckland Transport to break its contract with Veolia Transport Auckland (we understand it is currently proposed to run to 2016) in protest against the actions of this French multinational company and in support of the BDS (Boycott Divestment and Sanctions) campaign called by Palestinian organizations. Ending links with Israel and those companies which assist Israel to breach international law is the best way to bring pressure for it to abandon the apartheid policies it operates against the Palestinian people.

There is a growing list of transport bodies around the world which are ending or not renewing contracts with Veolia and we see no reason why Auckland should not be amongst them. For example within Ireland council which to date have taken such steps include Sligo, Galway, Castlebar, Dublin, Donegal, Fingal and Cork.

BDS Aotearoa and GPJA is calling for all supporters of the Palestinian freedom struggle to join a picket this Nakba, Wednesday 15th May 2013 at 5pm outside the Veolia offices in Customs Street (Citibank Building also the US consulate).

This Nakba come and join the international movement against Israeli occupation by joining the protests against Auckland Transport's contract with Veolia. 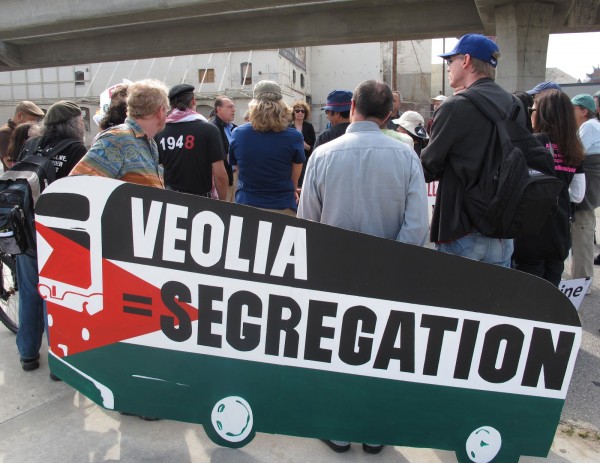 Some background notes courtesy of the Ireland Palestine Solidarity Campaign

Jerusalem Light rail
In 2003, Veolia won a $500 million contract to build and maintain a light railway that will run across the city of Jerusalem, including occupied East Jerusalem and the illegal settlement in the West Bank. The light railway project violates international law, not only because it is built on occupied Palestinian land, but also because it is an extension of Israel's illegal settlement enterprise and the Apartheid Wall. Through its subsidiary Connex, in Israel, it is one of the companies in the CityPass consortium, contracted to operate the light rail project in Jerusalem. The project plays a key role in sustaining the illegal settlements and ensuring they became a permanent fixture upon Palestinian land, while at the same time maintaining a system of Apartheid that isolates Palestinians and limits their mobility.

Tovlan Landfill in occupied West bank
Through its subsidiary Veolia Environmental Services, it also owns and operates the Tovlan Landfill in the occupied Jordan Valley, using captured Palestinian land and resources for the needs of the illegal Israeli settlements.

Bus services to the illegal settlements
Veolia's subsidiary, Connex, also operates regular bus services to Israeli settlements in the West Bank,
including Beit Horon and Givat Ze'ev along road 443, which is an apartheid road. Palestinians are not
allowed to travel on these buses or on these roads in their own occupied country.

The Irish Government and the United Nations do not recognise Israel’s annexation and occupation of East Jerusalem and have repeatedly stated their views that the Israeli settlements in East Jerusalem and the West Bank contravene international law and numerous UN resolutions.

United Nations Universal Declaration of Human rights
Due to the proximity of Veolia's operation in occupied Palestine they are clearly in breach of several articles of the UN Universal Declaration of Human Rights. The ongoing occupation of Palestine is in contrary to Articles 2, 3 which states that everyone is entitled to the right to life, liberty and security of person and that no distinction shall be made on the basis of the political, juridical or international status of the country to which a person belongs. Article 17 confirms the right to own property and it cannot be arbitrarily deprived of their property. Article 13 confirms the right of freedom of movement within their country, the right to leave and the right to return. Article 25 confirms the right to enjoy a standard of living adequate for the health and well being of himself and family.

The Fourth Geneva Convention
The settlements violate Article 49 of the 4th Geneva Convention, which provides that the Occupying Power shall not deport or transfer parts of its own civilian population into the territory it occupies as well as Article 53, which forbids destruction of property. Articles 146, 147 refer to 'Grave breaches' of the Convention amounting to war crimes as they involve appropriation of Palestinian property not justified by military necessity.

These grave breaches are being facilitated by Veolia’s participation in the construction and future of the tramway serving the settlements. In addition the tramway will discriminate against Palestinians as they will not be allowed to travel on it. This discrimination is no different to the apartheid South African 'whites only' system of discrimination.

International Court of Justice
The ICJ ruled in 2004 that the apartheid wall was illegal as they considered it to be an attempt by Israel to annex Palestinian territory contrary to International Law and that it interfered with the right of Palestinians to self determination system. The ruling is quite clear that all states are obliged to ensure compliance by Israel of UN Charters and International Law. Veolia, too, are obliged to abide by these laws and charters and should not be to rendering aid or assistance in maintaining the situation created by the wall nor should it be profiting from the ongoing human rights abuses of the Palestinian people.

The OECD Guidelines for Multinational Enterprises (2000)
Veolia are in contravention of these guidelines which state that enterprises should “Respect the human rights of those affected by their activities consistent with the host government’s international obligations and commitments”. Palestinians land is being illegally taken, homes demolished, farmland confiscated and olive groves destroyed to build the tramway.

The UN Global Compact (2000)
The United Nations Global Compact is a strategic policy initiative for businesses that are committed to aligning their operations and strategies with ten universally accepted principles in the areas of human rights, labour, environment and anti-corruption. The origin of Principles One and Two of the UN Global Compact is in the 1948 Universal Declaration of Human Rights (UDHR). The aim of this Declaration was to set basic minimum international standards for the protection of the rights and freedoms of the individual. The fundamental nature of these provisions means that they are now widely regarded as forming a foundation of international law.

Veolia is a member of The UN Global Compact which states that businesses should support and respect the protection of international human rights within their spheres of influence, and make sure they are not complicit in human rights abuses. However it activities in occupied Palestine clearly in breach these fundamental principles.

A few of Veolia’s lost contracts and legal actions –