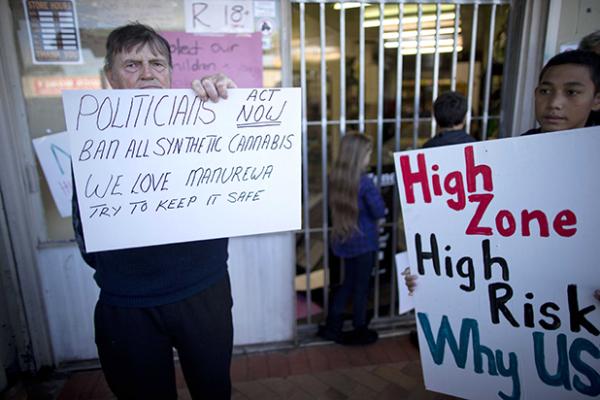 On the morning of Saturday 11 May, 200 protesters gathered in Manurewa against a store selling synthetic cannabis drugs. The confrontrational protest united teachers and children, parents and Labour MP Louisa Wall against the selling of synthetic cannabis. [Stuff Report | Herald Video]

The protest comes as part of a massive wave of mobilisations across the country against the sale of these harmful synthetic cannabis products.

In Turangi locals are circulating a petition, Tokoroa has a one-woman campaign and Oamaru has seen dairy owners turn a water blaster on mums who have witnessed synthetic cannabis harmful effects. In Invercargill there are angry sounds from vets who have seen dogs poisoned. In Dunedin, an ex-synthetic cannabis addict is picketing those selling legal highs. These groups are mimicking the highly-successful community campaign led by parents and the community newspaper in the Auckland suburb of Devonport.

The nationwide uprising is a spontaneous surge of resistance that is beginning to drive dairies to commit to stopping the sale of synthetic cannabis products. It's the sort of unstoppable rebellion that is the backbone of people power in this country.

The health effects of legal highs are well documented with five people taken to hospital with kidney failure in the last two weeks. Episodes of psychosis and seizures are common.

The Government's response to the community rebellion is the Psychoactive Substances Bill, a law that will require synthetic cannabis manufacturers to prove their products are low risk before they are allowed to be sold.

The law is a step in the right direction. We wouldn't allow highly addictive chocolate that causes psychosis and kidney failure to be sold in the dairy after all. But it won't solve the whole problem

Critically the law skirts a wider problem of natural cannabis prohibition. Unlike synthetic cannabis, natural cannabis is smoked by around 70,000 New Zealanders every day. These people come from all walks of life and include teachers, journalists, health professionals, politicians, farmers, builders, engineers and so on. Around 10% of New Zealanders or 400,000 people smoke cannabis each year.

Unlike synthetic cannabis, natural cannabis is already known to be low risk and in America states such as Colorado and Washington have legalised cannabis in the last year. Across the ditch in Australia marijuana use is decriminalised in the Australian Capital Territory, South Australia, Western Australia and the Northern Territory.

Yet despite the relaxation in the United States, here in New Zealand the state spends $100 million a year enforcing prohibition of cannabis and 6000 people are prosecuted by the police each year. By keeping safe, natural marijuana underground the police are in fact driving young people and children towards these legal highs with their much more violent and anti-social effects on people.

This is what no one is saying in the debate on legal highs. Why has it become accepted for New Zealand shops to legally sell artificial cannabis? Why is it not accepted for New Zealanders to legally buy natural cannabis? If society accepts the use of recreational drugs to be sold legally if they are low risk why will it not allow the use of cannabis?  To most people this makes no sense. But capitalism is a system based on profit. Drug companies can very easily make a profit on a drug that requires manufacturing and marketing through stores. In New Zealand where people could grow marijuana at home easily it would be very hard for corporations to make a profit out of it. This is the madness at the heart of the debate over legal highs.

Socialists need to stand both with the communities fighting against dangerous, artificial drugs and also with those fighting for the legalisation of natural marijuana. Community control over what can be sold in the local area is an important principle of democracy whether it is over pokie machines, alcohol stores or synthetic cannabis. So too is the right of individuals to responsibly use low-risk to no-risk drugs recreationally without fear of criminalisation. Joining up these struggles would pose a powerful challenge to those who profit from cannabis prohibition and the sale of untested, harmful synthetic drugs in our neighbourhoods. 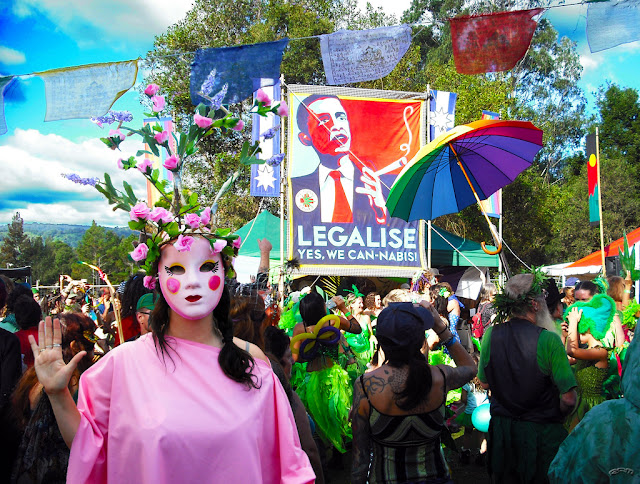 Grant said…
Check this out- Waikato DHB says, in effect, that cannabis is safer than synthetic "legal highs": http://imgur.com/yYikUiT
2:49 PM