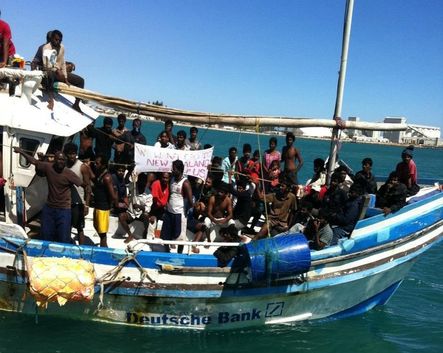 Last week 66 Sri Lankan asylum seekers landed in a small boat on Australia's west coast after an epic 44 day voyage across the Indian Ocean. Among the asylum seekers are children and a pregnant woman.


Sri Lanka was victim to a bloody civil war between the ethnic minority of Tamils and the ethnic majority of Sinhalese, a war that has lasted for over 26 years. The Tamils were consequently defeated in the civil war, by 2009 – 300, 000 Tamils were held in concentration camps controlled by the Sri Lankan army. Conditions within the camps included shortages of food, water and medical supplies. The squalid conditions resulting in a death rate of several hundred per month.

John Key's response has been to gloat that this justifies his hard line on asylum seekers. It does nothing of the sort. The asylum seekers face spending months or years in Australian immigration detention and  processing facilities. They face being returned to a country where they may be killed or tortured. As John Pilger has described the use of the term 'illegal immigrant',


The use of the term “illegal immigrants” is both false and cowardly. The few people struggling to reach our shores are not illegal. International law is clear – they are legal. And yet [the Australian Labor Party], like [former Australian PM] John Howard, sends the navy against them and runs what is effectively a concentration camp on Christmas Island. How shaming. Imagine a shipload of white people fleeing a catastrophe being treated like this.

The Sri Lankan refugees will now face the harsh conditions of Christmas Island detention centre a place described last year by Australia's own Human Rights Commissioner as harsh and overcrowded.

From there they face the possibility of being returned to Sri Lanka without having their asylum claims heard as Australian human rights lawyer David Manne spelled out in an interview with Fairfax Media.

The asylum seekers, by flying the New Zealand flag, have brought the issue of boat people to public attention. But it's not enough for us to tut tut when Australia imprisons people fleeing war and torture and returns them to their home country.

New Zealand accepts just 750 refugees a year while Australia lets in 20,000. We can and should do more to offer those fleeing war and terror a safe refuge.