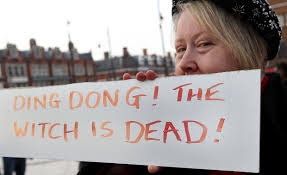 The core principle of socialism from below, that the liberation of the working class is the task of the workers themselves, can seem a daunting one.

After all if workers really wanted freedom and had an interest in the overthrow of capitalist wage-slavery then why do they behave like mindless drones the majority of the time? Why when things are so bad are so many workers apathetic?

Some Marxists point to dwindling voter participation rates or strike statistics in New Zealand and posit that the working class and their struggle against the capitalist class is over.

But the controversy in the United Kingdom over the entry into the pop charts of Wizard of Oz song, 'Ding, Dong the Witch is Dead' as a popular response to Margaret Thatcher's death demonstrates the weakness with this analysis.

Ding, Dong reached number two in the UK charts after selling over 52,000 copies. The pro-Thatcher campaign could only manage just short of 9,000 sales of an irreverent punk rock anthem 'I'm in love with Margaret Thatcher'. The corporate media may eulogise the Thatcher years, but the public have nothing but disgust for the vile woman and her policies.

Indeed we see the same pattern repeated across the pop charts of the last fifty years. Driven by the desire by working people for music that relates to their lives and their interests anti-capitalist songs have remained popular in a world that is said to be post-class and post-struggle.

Take for instance the song 'Killing in the Name of' by Rage Against the Machine. In 2009 a campaign got the 1992 song to number one in the UK Christmas charts as a protest against reality television show  X-Factors dominance of the charts. In the middle of the worst recession since the 1930s the anti-capitalist Rage used the song's stellar climb to raise funds and awareness about homelessness in the UK.

The UK charts prove time and again that instead of being servile and apathetic the toiling masses yearn for subversion and social change. During many years the hit songs are love ballads and irreverent party anthems but burrowing beneath is the conflict and contradiction built into capitalism.

Suddenly as Karl Marx said, "We recognize our old friend, our old mole, who knows so well how to work underground, suddenly to appear: the revolution."

From Peter Gabriel's 1980 hit 'Biko' to Marvin Gaye's 1971 'What's going on' music charts show that working people crave music that assists in explaining the world and aspires to change it. American troubadours from Bruce Springsteen to Kanye West depict the same trend. In order to achieve popular success and critical acclaim music must touch the everyday concerns of people who work for a living. Springsteen's songs from 'The River' to 'Wrecking Ball' follow the blight of Reaganomics on the old American industrial working-class centered in the highly unionised north-east. West's hiphop explores the gritty aftermath of neo-liberalism on black Americans trapped between precarious minimum wage labour and the growing prison-industrial complex.

The pattern holds true in Aotearoa. In 1969 the Save Manapouri campaign was launched, marking the beginning of the modern environmental movement in New Zealand. The same year The Fourmyula's iconic eco-song 'Nature' topped the local music charts.

Forty years later in 2009 the Smashproof hit 'Brother' clocked up a record stay at the Number One spot. The song which laments the killing of a young tagger by a businessman came a year after the triumph of John Key's National Party and during a time when the demonisation of young, Polynesian men was reaching a crescendo within the local Press. The song represents a popular response to the human price of the atomisation, class stratification and spreading poverty in New Zealand society as a whole and South Auckland in particular.

If we are to accept the pronouncements of the right-wing and some sections of the left then we should discount the agency of the working-class and their capacity to overthrow an unjust system. But closer  inspection of the currents that have swept popular culture along demonstrate the capacity for resistance by working people and their desire for revolution.

John Lennon's Imagine is remembered as one of the most influential songs of the dark twentieth century which was marked not just by war, injustice and mass murder but periodic outbursts of popular anger in which the working-classes in, to name a few, Russia in 1917, Germany in 1918, Spain in 1936, France in 1968, Iran in 1979, Chiapas in 1994 broke free of the system and began to create a new socialist world free from capitalism, imperialism and authoritarianism. Lennon's lyrics capture not just a refusal of the madness of the capitalist system but faith in a socialist future,

Imagine no possessions I wonder if you can
No need for greed or hunger A brotherhood of man
Imagine all the people sharing all the world
You, you may say I'm a dreamer, but I'm not the only one
I hope some day you'll join us And the world will live as one