Showing posts from February, 2013
Show all

The New Zealand Superannuation Fund, ($20 billion of taxpayer investments that funds our pensions) currently holds investments in over forty Israeli companies including two Israeli banks that finance the construction of illegal Israeli settlements in the Palestinian West Bank. Despite the Superfund having an ethical investment policy, $915,806 is invested in Bank Hapoalim and $77,476 is invested in Bank Leumi According to Electronic Intifada , Both banks operate in and offer loans to finance illegal settlement activities in the occupied Palestinian and Syrian territories.... Both banks have branches in the settlements of Gilo and Pisgat Ze’ev, located in the occupied West Bank. Bank Hapoalim also has branches in the Ramot settlement in occupied East Jerusalem as well as the occupied Golan Heights. Meanwhile, Bank Leumi maintains branches in the settlements of Ma’ale Adumim, Oranit, Kiryat Arba, all in the occupied West Bank, and Katzrin in the Golan Heights. Israel’s sett
Post a Comment
Read more 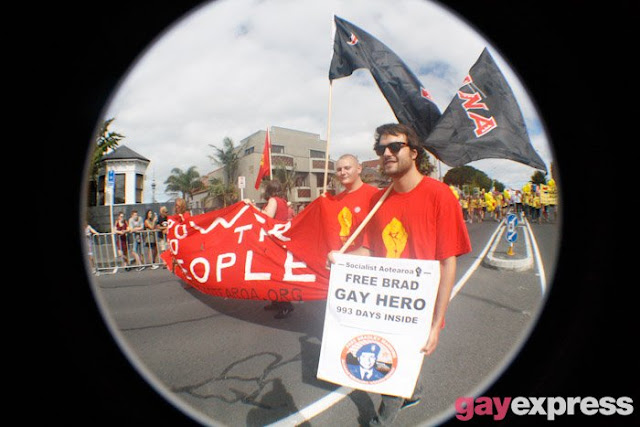 Socialist Aotearoa members joined thousands of other Aucklanders marching in the first Gay Pride march in the city in twelve years. The first since Mayor John Banks pulled funding on the Hero Parade in 2002. Labour, the Greens and Legalise Love marched in support of gay marriage. Floats and groups from across the queer community from school student groups to bars and roller derby thronged Ponsonby Road. The crowd went wild when dozens of queer soldiers, sailors and air force workers marched together. And a chorus remembering the victims of HIV/AIDS moved some to tears in the audience. Amnesty International members marched to highlight the persecution of gay people internationally. Carrying placards calling for the release of Bradley Manning, Wikileaks whistleblower who is today on the 993rd day of incarceration, SA members marched in Pride 2013. The judge ruling in his court martial yesterday ruled that Manning would not be able to present evidence relating to why he leake
Post a Comment
Read more 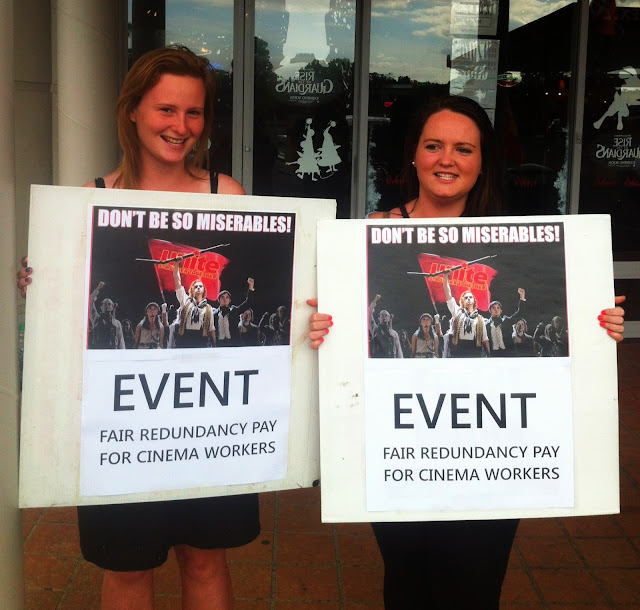 Last Wednesday (30th, January 2013) Event Cinemas Highland Park closed its doors for the last time. Outside, some of the workers (many of whom have been laid off due to the closure) engaged in an impromptu Les Miserables re-enactment with red flags and placards. The biggest tragedy is the pathetic redundancy pay. Just two weeks pay for all laid off employee. This has been offered by management to workers who have served as many as 17 years. This is pathetic compared to other Western nations that have redundancy pay set in law often calculated at an extra week or two weeks pay for every year worked. This struggle has quite a few parallels with Les Miserables where the poor find themselves repeatedly victimised by the rich despite already being significantly disadvantaged. Here are workers who simply want to support themselves and often their families while a company with plenty of money to spare tries to maximise profits once again at the expense of workers. When a group o
Post a Comment
Read more
More posts