Revolution conference - Spring in our step 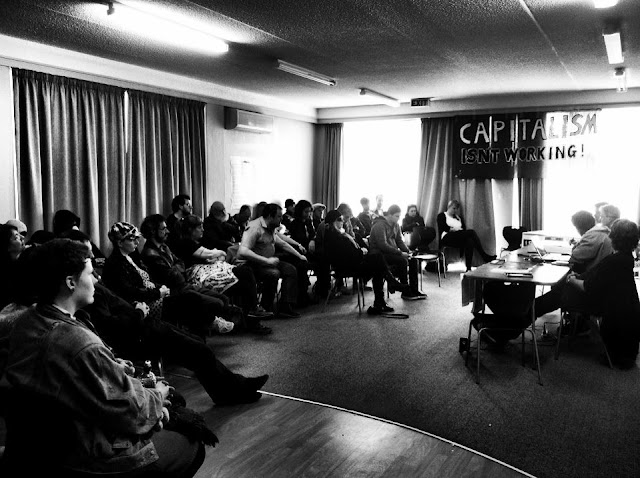 Debating the future of the left on Saturday afternoon, Matt McCarten from Unite union told the conference that Socialist Aotearoa is a small but serious part of the left, respected for its interventions in union disputes and political campaigns and 'Punched above its weight.' Labour MP Darien Fenton also spoke at the closing session, calling for unity on the left to fight the Government. And Joe Carolan from Socialist Aotearoa discussed the situation of the radical left internationally and the success of parties of the radical left such as Die Linke in Germany and Syriza in Greece and the need for a radical left alternative.

Over sixty activists attended through the weekend and important sessions were held on union struggles, the new fights against oppression, the Arab Spring and Marxism today.

A good crowd turned out on Friday night to hear speeches from Miriam Pieard of Aotearoa is Not for Sale, Jai Bentley Paine, from Blockade the Budget, Jimmy O'Dea from the Tamaki Housing Group, Mike Treen from Unite and Joe Carolan from Socialist Aotearoa.

Saturday morning opened with a session on the relevance of Marxist theory followed by a session on the struggles of oppressed peoples. Socialist Aotearoa activist Paul Brown spoke about disabled people fighting against the system of 'Cure, containment and control' and systematic discrimination. "We need to say enough is enough and join disabled people in the fightback.'

A union session on Saturday afternoon heard from Russell Mayn, Secretary of MUNZ Local 13 on the war still being waged on wharfies by Ports of Auckland. Russell described the constant harrasment and victimisation of union members on the site and the grinding court disputes over rosters and privacy rights. "The attacks on our union are part of an agenda - privatisation by stealth."

Meredydd Barrar, Vice President of NZEI teachers' union West Auckland branch, told the session, "New Zealand's teachers are the lowest paid teachers in the OECD and they work the longest hours." Omar Hamed from Socialist Aotearoa spoke of the need for the union movement to fight attacks on workers rights and push for pay increases together, 'We need to push union leaders to renew their commitment to fight the government.'

The conference acknowledged the need for Socialist Aotearoa members to continue the work in Aotearoa is Not for Sale, in Glen Innes, in the education sector and the union movement to fight the government. Socialist Aoteroa also reaffirmed its alignment with the International Socialist Tendency. Socialist Aotearoa welcomes all those new members who joined over the weekend and looks forward to the new year of struggle ahead.