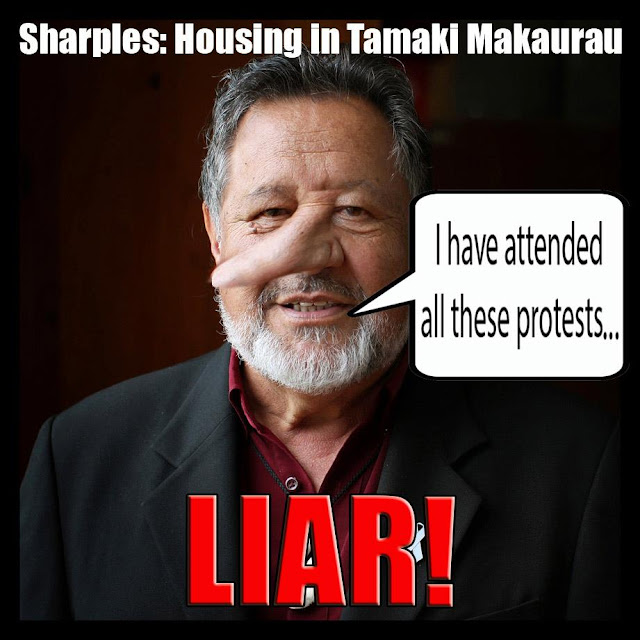 Pita Sharples is inferring that the people of Glen Innes who are having their houses stolen from them by this National government are afraid of their own community. He lied!

On one hand he says those who are being evicted are scared to say that they want to leave because of the protests from residents when their homes are being removed. On the other hand he says that the community is being torn apart and people taken away are leaving behind not just their houses but their maraes, their kids schools their friends and whanau.

If you would believe Pita Sharples, his slanted version is: remove old housing, take it out, put in new housing there, make more houses available and move other people in amongst the suburb. He also says there is an acute housing shortage – why then are the houses being removed? They are soundly built houses that are in excellent condition.

So do these people want to leave their beautiful solid state houses that they have loved and maintained for many years and sent to live in high rise housing in a distant suburb away from friends and community? No, they don’t! He lied!

The protests and public meetings in the community have been happening now for almost a year and the Housing Action Committee in Glen Innes have spoken and listened to those in their community. They have been pleading with Housing NZ to listen to the people.

It is the people of Glen Innes that have been spearheading the protests and the meetings and others have supported them from all around Auckland when they can. Yes there have been MPs from Mana and from Labour but never has Pita Sharples turned up to support the GI people when houses were being moved off the land. He lied.

Lets talk about the land, the land is the real reason these houses are being moved, they have a view of the water and poor working class people don’t deserve a view do they?

Therefore the solution appears to be, move off the houses and sell them off, then sell the land to developers and build houses for the wealthy! After all, they will appreciate the view and pay for the privilege. The Glen Innes community are experiencing the asset sales first hand by losing their homes.