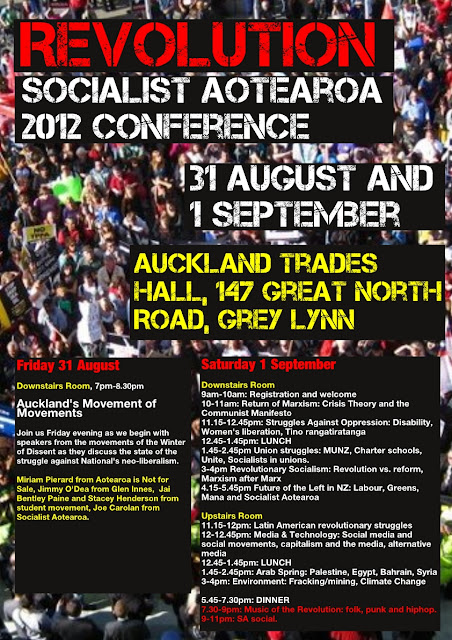 It's a chance to critically assess the key international and national struggles of the last year - the Auckland ports dispute, the education cuts, the Arab Spring, the challenge to asset sales; to examine contemporary political issues - new struggles against oppression, tino rangatiratanga today, Latin America at the crossroads, social media and social movements; and to refresh our theory - Marxism, women's liberation and socialist environmentalism.

For new members and supporters this will be a fantastic introduction to the politics of Socialist Aotearoa. We look forward to seeing you this weekend. If you have questions about the weekend get in touch with us.

Friday night: Auckland's Movement of Movements
7pm - 8.30pm Friday 31 August in the Downstairs Room
Join us Friday evening as we begin with speakers from the movements of the Winter of Dissent as they discuss the state of the struggle against National's neo-liberalism. Miriam Pierard from Aotearoa is Not for Sale, Jimmy O'Dea from Glen Innes, Jai Bentley Paine and Stacey Henderson from student movement, Joe Carolan from Socialist Aotearoa.


A creche will be provided as will lunch, coffee and snacks over Saturday. Registration for conference is $10.
Conference Events