Keep calm, struggle on in Quebec 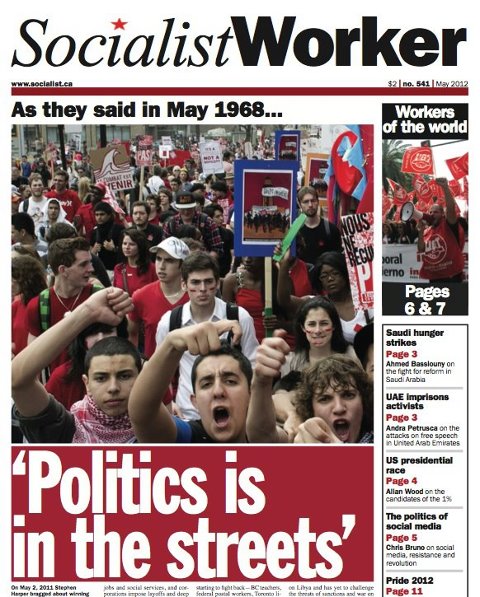 May Day in Montreal
This May Day, Montreal was under the influence of its inspirational 12-week long student strike denouncing the Liberal government’s plan to raise fees by 75 per cent over five years.

Unions had asked workers to “stand” outside workplaces during lunch wearing the now iconic red square prominent everywhere in the city. Union members also rallied outside the main FTQ offices in solidarity with students. At noon, hundreds of striking students drew attention as they symbolically planted a Liberty tree, a red maple tree, outside Charest`s office.

Quebec’s artists, responding to the social crisis that the students’ struggle has exposed, chose May Day for a press conference to present a letter declaring, “Nous sommes avec les étudiants. Nous sommes ensemble” (“we are with the students, we are together”).

Late afternoon, CLAC, an anarchist based network, mobilized several thousand including striking students and a contingent of professors against tuition fees. But the police declared the march illegal as they scuffled with a black bloc contingent. Police lines split demonstrators into smaller marches which regrouped from time to time as they attempted to regain control of their march. Most of the 107 people arrested in the day’s actions were arrested out of this demonstration.

Young Couche-Tard convenience store workers, newly unionized, joined the ranks of nurses, public sector, daycare, construction and other trades workers along with community, women’s and church groups. Demonstrators chanted slogans against the government’s austerity measures, for a freeze on tuition fees and the resignation of the Premier and Education Minister.

May Day wrapped up with the 8th Nuit Nocturne in Place Emille Gamlin. These marches, organized nightly by La CLASSE, normally draw out thousands of striking students vowing to keep up the pressure.