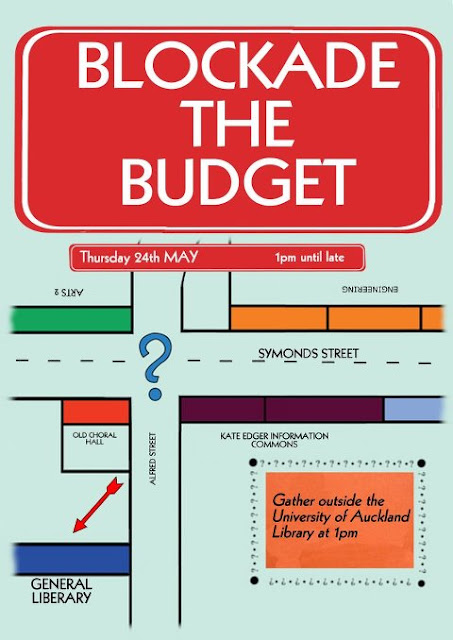 Auckland University students are planning a demonstration against the Government's changes to loans and allowances. Activist group 'Blockade the Budget' is calling for students to gather outside the library at 1pm on Thursday next week for a "strike" against the changes, announced ahead of this year's Budget – also scheduled for Thursday. The changes include increasing the rate at which loans have to be paid back and freezing the parental income threshold for allowance availability to under-25s.

But it's the capping of student allowances to a maximum four years of study that has brought the most anger. The group says it will "result in only the most wealthy students having access to occupations such as medicine, law and engineering, and means that students who may wish to pursue an academic career in the university will be unable to do so".

"By limiting student allowances to only four years of study, we're saying that only those who already enjoy a privileged position in society are invited to contribute to the continued improvement of this country," says student Brendon Steen.

"The impact that this will have on post-graduate study is significant. It's those people who dedicate a significant period of their lives to higher education who are going to be the leaders of tomorrow - particularly in science, technology and engineering."

The protest has been endorsed by the Auckland University Students' Association. Student loan debt is carried by around 500,000 New Zealanders, totalling over $11 billion – more than doubling in the last decade. Tertiary Education Minister Steven Joyce says the changes will save the Government at least $60 million a year. Source: 3NEWS
Auckland Education Events Students