- May 31, 2012
If John Key's right-wing, authoritarian Government weren't in power its possible that Avondale hiphop outfit Home Brew could be writing whole albums about smoking weed and drinking booze on a Creative NZ junket that never ends. Rappers however do not write their rhymes as they please; they make it under circumstances not of their own chosing.

Home Brew's self-titled, debut, double album is political and personal in equal measures. In the 21 tracks listeners are treated to a description of the unity of opposites that Marx and Engels called dialectics; the world as, 'a complex of processes, in which the things apparently stable no less than their mind images in our heads, the concepts, go through an uninterrupted change of coming into being and passing away'. Grappling with dialectics forces us to see the world as a constantly morphing place where everything is slowly turning into something else - its opposite. Happiness is alienation. Wealth is poverty. Love is loss.

Home Brew's album is a lyrical descent into the depths of these contradictions.

The themes of thesis and anti-thesis, negation and the negation of negation, are structured into the album - 'One side, light. The other, dark.' This is the Avondale dialectic - a beer foaming, bud burning, dole day spending exploration of the beautiful and the ugly side of life in Auckland in particular and in John Key's 'brighter future' in general.

Alienation
The starting point of the light disk and the album are three songs about alienation - Dedicated to, Benefit, Alcoholic-  'This is for the shelia with the bung eye and too much pride to let her son see his mum cry. For the has beens that had dreams. The fucks ups and crack fiends. The drop outs and drag queens. For the last kid picked and the first kid picked on.' As Joseph Choonara writes, 'The theory of alienation is Karl Marx’s account of how capitalist society distorts human relationships – both between people and between themselves and the world around them'

Aufheben
Aufheben - to abolish, to transcend, to supersede. Aufheben of alienation is the next waypoint of the Home Brew album with two tunes about high times in the city - Yellow Snot Funk, Datura/White flowers. 'Are you going to live or what? You've only got one live it up. What you got drunk? Let's sniff it up. Who gives a fuck? Because every single shitty club in this shitty city's shut. So live it up. you may as well get liquored up.'

Contradiction
Contradiction of extreme wealth and capitalism alongside extreme poverty and misery. Of ideology and material reality. As Marx wrote to Engels, 'the contradictions of material life, from the existing conflict between the social productive forces and the relations of production'. In Everybody, 'See in my country the suicide rate as high as a junkie. it's funny because we are the ones who invented the Bungie'. In Last Day, 'It's hard to be a man and a sneaker fan holding kicks made in Vietnam...Sick of wearing crusty jeans with busted seams, so fuck my dreams...' Jarring juxtapositions haunt these two songs as Home Brew explores the contradictions inherent in actually existing, consumer capitalism - 'Is this reality? Or a parody. Apparently, I need some money. That's what I am told. So I'm selling my soul. Well I'm telling my olds I'm going to be somebody. But I probably won't.'

Unity of opposites
The last three songs on the Light Disc are about the unity of opposites. About some order, stability and reassurance arising from a city of turbulence and of growing up in capitalist modernity. In Time Don't Wait, 'I ain't got no money but I'll be ok.' In Basketball Court- 'I smell the tar seal burning in the summer sun and melting bubble gun mixed with burning rubber from my bike's back tyre.' In Radio, 'Everything will be all right when I get home and put a record on. Cause that's just what I do. Like ever since I was a kid I would play my music on my radio cause that's all that I knew.'

The psychogeography of Auckland
The first five songs on the dark disc explore life in Auckland with the most dystopian of twists. Jobs that don't pay. Relationships that fall apart. Loneliness. Drug abuse. Depression. Suicide. The most haunting elements of life and death are illuminated by Home Brew in a psychogeographical animation of post-crisis Auckland. Guy Debord - alcoholic, marxist, writer, situationist -wrote of this, 'People can see nothing around them that is not their own image; everything speaks to them of themselves. Their very landscape is animated. Obstacles were everywhere. And they were all interrelated, maintaining a unified reign of poverty.'

Dark Intro - 'I've forgot how long I've been broke for. It's just normal now... Just work at the same old job until you fuck your back. Cut this fucking act dreaming about being rich. lady luck she can suck my realist dick. Dictatorship that we're living, you can sell the system, I'll be selling tickets to the crucifiction, up to working class people who don't ever get  a break. Working 14 hour shifts for $11.38 with no rise, stuck in coal mines, for their whole lives, working overtime till their soul dies.'

State of Mind - 'Prison is a state of mind, doing time. Misery is a a mate of mind. Sometimes I feel as if I'm doing life, but am I really alive or just surviving. it's like solitary confinement. I've had these bars so long i can't tell what's behind them. Plastic Magic - 'Don't want to let her in, but I can't get rid of her. I need my medicine because I'm about to snap.' The truth is ugly - 'All I rally know is neither of us want to die alone.' 55 Stories - 'Walking through the night, kicking puddles...Dark clouds blacking all the stars out. Deep down I'm feeling beat down.' 'Someone to share my 20cent piece with. Instead I throw it to that guy with the harmonica, because when he tips his hat at me, I feel like he's acknowledged my existence.' Bourbon & Coke - 'Sitting on that same park bench where we once hung. Trying to chop down that fucking tree where you hung from.'

Class consciousness
Listen to us and Good God are leftist and atheist anthems par excellence respectively. Listen to us - 'Fucking Prime Minister ain't even got the time to talk. Cutting off the dole, trying to justify why we are poor'. Good God  - 'Don't give me all that shit about you working in mysterious ways. That's some bumber sticker shit for fools who believe in lies and spend their rent paying 10% weekly tithes.'

Love songs
Fungi/Absence - 'I think that I want to keep you', and Space - 'Take my ring and let me be your Saturn...you knock me off my axis, now all I can do is drift through the blackness',  are love songs that provide no comfort to those looking for a happy ending in this album. Emotional bleakness and passion, mixed with a wikid amount of illegal chemicals, these songs drip with raw emotion. This is perhaps the only criticism that can be made about Home Brew, by the end of listening to the album, you'll feel emotionally exhausted. This album connects to the listener by generalising Home Brew's alienation, the listener of this album 'annihilated in estrangement; it sees in it its own powerlessness and the reality of an inhuman existence.'

Avondale, is a working class suburb that faces both inwards towards the city center and up to the inner-west areas of Grey Lynn and Kingsland but also out towards the Waitakere ranges which encircle the city. It looks in to a sprawling city built over and around volcanoes. It looks out over suburbs marching into the rainforest clad hills. It embraces the positive and the negative forces of history and society that are embodied in this album.


Home Brew's debut album is an attempt to join up the dots between what Tom Scott sees, thinks and feels in this city, suburb, country. Listening to the album can take us close enough to touch the dialectic forces that does, undoes and redoes Auckland and its people every single day. 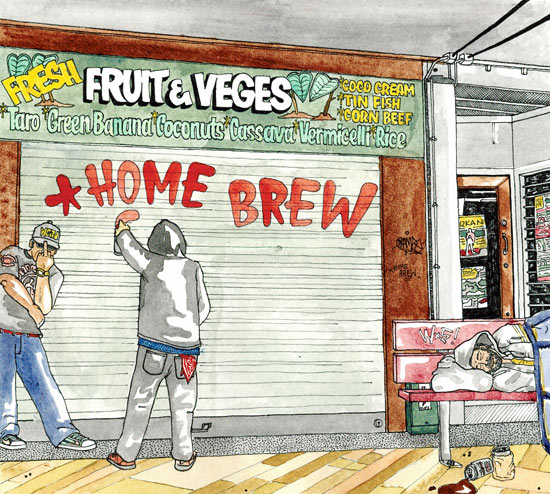