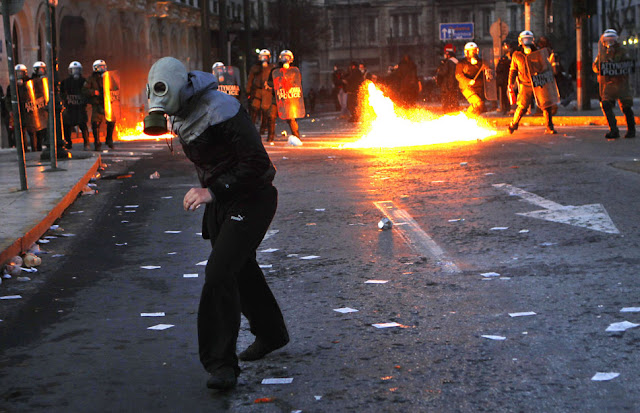 Across the world, ordinary people are raging at the bankers. And it’s no wonder.

As the rest of us suffer the effects of the economic crisis, these fat cats are still raking in billion-pound fortunes.

In the years since the banking system came to the brink of collapse in 2008, people have clearly identified them as the ones who bear responsibility for the crisis.

This has fed the sort of class rage socialists should encourage. It’s certainly better than putting the blame on migrants, unemployed people, or public sector workers.

But it is also important to acknowledge that the underlying causes of the crisis capitalism finds itself in are more long-term and complex.

The crisis has shifted between different parts of the economy as the years have gone by. The bank bailouts left states holding the can, in the form of so-called “sovereign debt”.

This debt is in turn owed to banks. And they’re nervous the states won’t be able to pay it back. So the stronger economies have “bailed out” the weaker ones, again to shore up the banks.

Now that has caused the crisis’ latest manifestation—the ruling class’s turmoil over resistance to austerity in Greece and the possible collapse of the euro.

All this did not just arrive out of nowhere. The crisis was caused by underlying trends in the capitalism system.

The revolutionary Karl Marx identified the reasons why capitalism goes into crisis.

In the short term, it goes through frequent cycles of boom and bust. But this is a symptom of a far deeper problem—a tendency towards overproduction.

As capitalists compete, they battle with each other to produce enough goods to dominate the market, buying ever-better machinery to do so.

But as other capitalists rush into the same markets, more is produced than can be sold. Crises of overproduction break out as unsold goods pile up and firms go bust. This, together with long-term falling profit rates, causes capitalists to look for short cuts.

Neoliberalism, with its emphasis on letting the financial markets rip, was a way of trying to restore bosses’ profits by squeezing workers. But it only partly managed this.

And at the same time the growth of finance, a sort of gambling den for the ruling class, has added to capitalism’s chaos.

Prospect
Capitalists pile in behind everything that looks like a hot prospect—whether it’s dot-com firms or sub-prime mortgages—creating huge financial bubbles.

Stock market chaos is a symptom of crisis in the “real economy”. It can also aggravate this root crisis.

It was a financial bubble bursting that sparked the latest round of crisis. And as capitalism ages, these crises get longer and deeper.

Many suggested solutions have been targeted at reining in finance. This has included calls for stronger bank regulations, breaking high street banks off from investment banks, and banning financial wizardry like “short selling” and “derivatives”.

But just putting the bankers on a leash won’t end the crisis. They are part of the problem—but not the root of it.

We want to make the rich pay, not the working class. We want to take that bailout money back and spend it on useful services for all.

But it’s the bosses’ whole system that has caused this. We need to get rid of it all.

Dave Rutherford said…
Marx also warned of the growth of guard labour as capitalism became more and more desperate.Yesterday's protests showed this trend is already well established in NZ.How long before the police call for more powers to maintain that old saw "Law and Order?" Be careful waht you wish for Bill....
3:07 PM