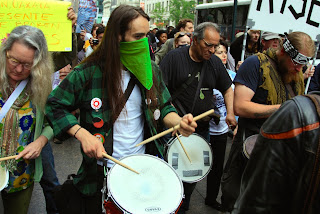 After months of planning and “spring training” by both Occupy Wall Street and the police, May Day finally arrived. No one knew what the turnout would be, if people would answer the call to a general strike, a day without the 99%. People were urged not to attend classes or go to work in order to show what a day would be like without essential parts of the community. As the day progressed it became evident that people had answered. Occupy Wall Street brought May Day back to America.

Many analysts and critics have attempted to discredit OWS through mainstream media. Pointing to their lack of precise “demands”, the fact that they don’t support either of the two major political parties and casting doubts on the future of the movement after mass evictions from their original encampments. However, questions of the efficacy and resilience of the movement have been answered by over 15,000 New Yorkers marching down Broadway to Wall Street on May Day. Thousands also turned out in other US cities.


May Day, which has its origins in US, has largely been ignored in New York and elsewhere for many years. In fact, since McCarthyism, the importance and the meaning of May Day has been virtually erased from mainstream discourse. Ronald Reagan designated 1 May to “Law Day”, further erasing any reference to the origins of May Day, which date back to 1886. 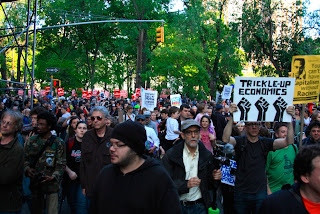 Fighting for an 8-hour working day, mass protests erupted around America. On 3 May 1886, without warning, police opened fire on strikers in Chicago, killing four and wounding many more. Following the killings, local anarchists called for a rally against police brutality. Thousands turned out in solidarity. Debate over how to proceed ensued, until police decided to disperse the crowd, moments later a bomb went off, killing one police officer and wounding several others. In the commotion police started wildly shooting at the crowd, killing many civilians.

Following the massacre, martial law was declared in Chicago. Hundreds of activists and labour leaders were arrested and interrogated, anyone who had anything to do with the labour movement or leftist groups was a target. Eventually eight anarchists were put on trial for the bombing. No evidence has ever been provided linking the “Chicago Eight” to the bombings. They were all convicted and seven sentenced to death. 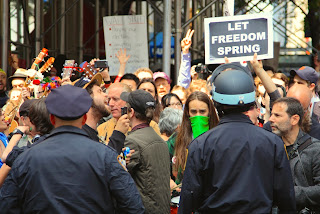 Fast forward to 2012, and May Day is relevant again. Young people are learning the history of the date thanks to the popularity of OWS with the young, who have long been disillusioned and uninterested in politics. OWS has energized many students and there is a sense of renewed awareness.

I stood at Union Square as Das Racist performed one of their politically charged verses and I looked around the park. One thought dominated; It is May Day, this is New York, there are anarchists, labour unions, students, people of all races and religions standing together. I wondered if a TV News helicopter would arrive and hover above the crowd, asking everyone through loud speakers, “what are you protesting about?” and “what are your demands?”, but the only helicopters hovering above were police helicopters. US mainstream media have again ignored the significance and the size of the demonstration. New York Daily News printed that “hundreds of protesters” had gathered. 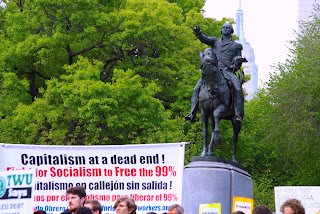 Regardless of mixed reports coming from different media outlets on May Day, OWS has succeeded in revitalizing the grassroots left, getting young people interested in politics and making May Day relevant in the US again. I talked to Frank, one of the veteran occupiers, and asked “what does it mean for you to be here?”, without hesitation, as if he already asked himself that, he stated “to show solidarity with workers who are not able to be here, who are afraid to lose their jobs if they strike or commemorate May Day”. Like a character in a law drama, “no further questions” I said.


The day proceeded to be festive, with Tom Morello, Das Racist and Immortal Technique, to name a few, performing throughout the afternoon. Once the march commenced from Union Square to Wall St, it was rather an impressive sight. Thousands of people as far as your eyes could see, in both directions of Broadway, with different banners and all united over their concern for the future. Which begs the question, what next? 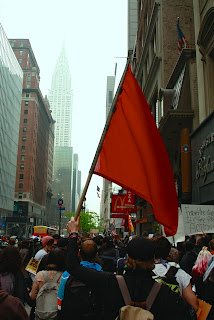 Information coming from the OWS media relations team suggests that the movement is focused more on specifics issues, like student loans and housing, rather than awareness. OWS has won the battle for awareness and the hard work is only just beginning. It is a marathon, not a hundred meter race. With the US election race heating up, many have posed the question “will OWS endorse Obama?” OWS has repeatedly answered “no”, although not everyone is convinced.

Today, days after the big May Day march, students and OWS activists are joining together at campuses, having teach-ins, protesting astronomically high fees and organizing an “alternative university.” Whatever analysts and critics debate about OWS through the media, OWS continues the grassroots recruitment and targeting of banks and universities, almost indifferent to what the New York Times or New York Daily News says. May Day was a signal of the return of Occupy Wall St, but I think Immortal Technique have summed it up the best as they were exiting, "When people say we're back, we say we never left."