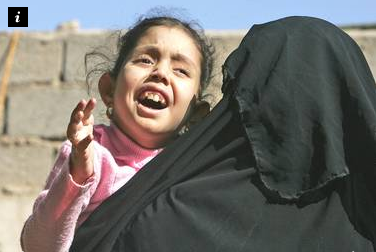 The New Zealand Superannuation Fund has $227,049 invested in GenCorp Inc, a corporation which is a leading manufacturer of depleted uranium weapons for the US military.

Over the last week Independent journalist Robert Fisk is currently in Fallujah, Iraq reporting on the horrible birth deformities which have been caused by the use of depleted uranium weapons in the city in 2004.

In his first report Robert Fisk brought us the story of one baby, Sayef, born with deformities in Fallujah,


For little Sayef, there will be no Arab Spring. He lies, just 14 months old, on a small red blanket cushioned by a cheap mattress on the floor, occasionally crying, his head twice the size it should be, blind and paralysed. Sayeffedin Abdulaziz Mohamed – his full name – has a kind face in his outsized head and they say he smiles when other children visit and when Iraqi families and neighbours come into the room. But he will never know the history of the world around him, never enjoy the freedoms of a new Middle East. He can move only his hands and take only bottled milk because he cannot swallow. He is already almost too heavy for his father to carry. He lives in a prison whose doors will remain forever closed.

In his second report Fisk visited Fallujah General Hospital and met with medical professionals dealing with the radioactive fallout of the US seige of Fallujah.


But the photographs are a damning, ghastly reward for such doubts. January 7, 2010: a baby with faded, yellow skin and misshapen arms. April 26, 2010: a grey mass on the side of the baby's head. A doctor beside me speaks of "Tetralogy of Fallot", a transposition of the great blood vessels. May 3, 2010: a frog-like creature in which – the Fallujah doctor who came into the room says this – "all the abdominal organs are trying to get outside the body."

In his third report Fisk details the "Know nothing. See nothing. Say nothing." attitude of the US and UK Governments.


It's the same again in Fallujah today. The doctors talk of a massive increase in child birth deformities. The Americans used phosphorous munitions – possibly also depleted uranium (DU) – in the 2004 battles of Fallujah. Everyone in Fallujah knows about these deformities. Reporters have seen these children and reported on them. But it's know nothing, see nothing, say nothing. Neither the Iraqi government nor the US government nor the British will utter a squeak about Fallujah. Even when I found in the Balkans a 12-year-old Serb girl with internal bleeding, constant vomiting and nails that repeatedly fell out of her hands and feet – she had handled the shrapnel of depleted uranium munitions after a Nato air strike near Sarajevo in 1995 – Nato refused to respond to my offer to take a military doctor to see her.

In 2010 Socialist Aotearoa joined the wave of outrage that swept the world when an epidemiological survey showed that atomic genetic damage and birth deformalities in Fallujah is worse than it was in Hiroshima and Nagasaki. Our report Fallujah - A poisoned city noted,


The destruction of Fallujah, once an ancient university town, now a radioactive, bombed out, corrupt, open air prison gives a chilling vision of what happens when the US military decides to punish a population for resisting occupation. Fallujah is the archetypal dystopian city brought into existence by US imperialism.

The children of Fallujah need justice. We can help the families of Iraq by campaigning for our SuperFund to divest from GenCorp, which manufactures these nuclear weapons.