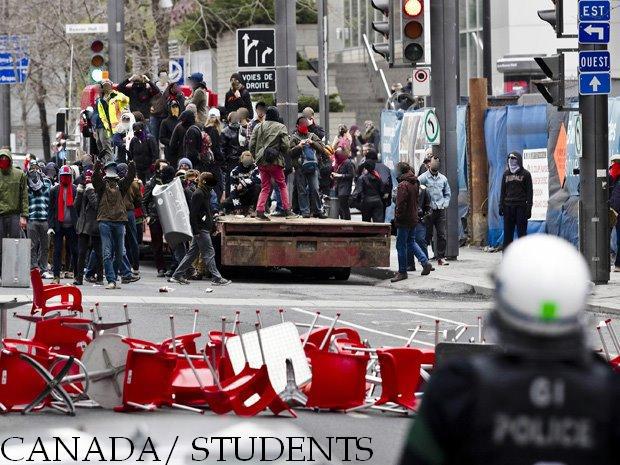 Student groups have held demonstrations in Montreal and across Canada every day since an indefinite strike was declared in February 2012 against government plans to increase tuition fees by 75 per cent. The media and government have attempted to divide them, the police have attacked them but the strike wave continues.

There has been solidarity from students on campuses across Canada, the Canadian Federation of Students and the Canadian Association of University Teachers. Tactics have included shutting down the universities, occupying banks, blockading corporate offices and powerful street mobilisations.

On the 22nd of March 2012 (with numbers of over 200,000) Canada saw its largest demonstration since the 2003 protest that stopped Canada from entering the Iraq War.

The sheer size of the strike is already building broader movements, from April 22nd Earth Day protests to May Day workers protests. Some are calling the movement “printemps érable” – which translates as “Maple Spring”. Police have been on the offensive; using chemical weapons, rubber bullets, horses, batons, shields and full body armour to execute their attacks. On the 11th April 2012 Montreal police dispersed a sizable blockade at the Banque Nationale Tower using chemical weapons. In Quebec City, protestors occupied a CIBC bank near the National Assembly. However when police entered to forcibly remove them, the group merely crossed the street and occupied a Banque Nationale Branch.


On the 26th of April a day of demonstrations and a night of rioting saw bank windows smashed, corporate offices blockaded, three police hospitalised, a police station severely damaged and 85 people arrested. The violence erupted after negotiations between students and the authorities broke down again. The Quebec government has since banned C.L.A.S.S.E (one of the student groups) from negotiations for breaching a ‘truce’. In solidarity, various other student groups have declared “no more negotiations” until C.L.A.S.S.E is invited back to the table.

This mass movement has far bigger goals than merely defending affordable tuition fees. It was the involvement of workers, inspired by students in Tunisia and Egypt that led to radical political change. The students in Quebec have not only re-ignited the labour movement, they are leading the most intensive direct political action for a generation. Students around the world are being inspired by the organisation, determination, courage, commitment and comradeship being displayed by Canadian radicals. "If you go to one demonstration and then go home, that’s something, but the people in power can live with that. What they can’t live with is sustained pressure that keeps building, organisations that keep doing things, people that keep learning lessons from the last time and doing it better the next time." – Noam Chomsky

For more information on the Quebec student strike visit www.bloquonslahausse.com or www.stopthehike.ca