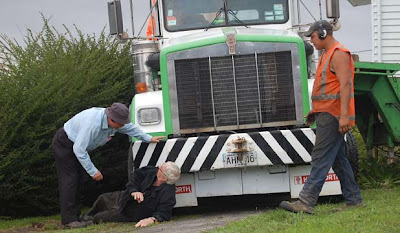 Mana members and supporters stopped trucks from removing empty houses on Monday from Glen Innes as resistance to social cleansing continues in Auckland. During the protest Jimmy O'Dea, a veteran of the State Housing Action Coalition of the 1990s and the occupation of Bastion Point was injured. But the trucks retreated from Silverton Ave saying the demolition was too political for them.
The Glen Innes community has vowed that not one house will be destroyed in Glen Innes by this smash and grab National Government and Mana, Socialist Aotearoa and other sections of the fighting left in Auckland will be right beside them every step of the way.
Mana put out this media release today,

Mana supporters are deeply upset that veteran activist Jimmy O’Dea was injured this afternoon and taken to hospital trying to stop the removal of state houses from Glen Innes. The house is at 25 Silverton Ave Glen Innes.
“Jimmy is a diamond of a man who put himself in harm’s way in front of the house removal truck to try and protect the state houses of low-income residents of Glen Innes” says MANA Vice President John Minto. “Contracting companies are being used as the front line of attack against a community desperately trying to save their state houses. The government is selling state houses and the land beneath them to private developers for luxury housing on the high ground on the north side of Glen Innes. State house numbers will be reduced and the residents moved into soon-to-be slums in central Glen Innes”.
Houses under immediate threat are at 25 Silverton St and 6 Melling Streets.
Mana supporters are on site and coordinating support for the community and opposition to the removals. 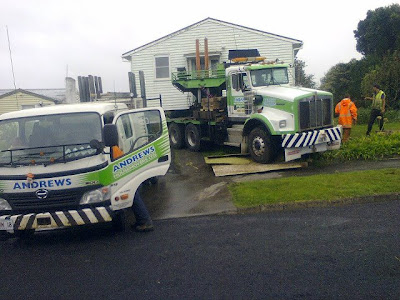 Warwick Taylor said…
Good on you. Keep it up! Sorry that I live so far away.
6:54 AM