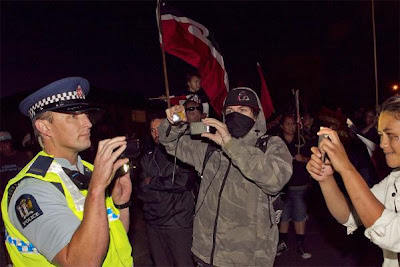 This was always how it was going to end for the National Party.
With lines of cops attacking residents protesting the privatisation of Glen Innes. With cops putting some people in hospital and using bail conditions to prevent some people from returning to Glen Innes. With casino capitalists doing dodgy deals up at SkyCity. With picketlines stretching across the country's ports, freezing works and rest homes. With provincial councils declaring themselves frack free zones. With a funeral for Maui's dolphin. With a hikoi of resistance heading south from Te Reinga.
John Key's war on working people and the planet will come to a shuddering halt this Autumn. On Hope Street, Aotearoa. On Hope Street, people are asking each other, "What kind of country do we want to live in?" "Not a country run for corporate profit and plunder," is the answer that echoes from Moerewa to Invercargill.
In just five days time a hikoi of hope and resistance will leave Te Reinga Wairua and head south across Te Ika a Maui. Under Autumn skies the people of Hope Street, Aotearoa will march. As they pass by the urupa and cemeteries of the North Island Hone Tuwhare's recollection of Whina Cooper on the 1975 hikoi will blow in the air, "And you must think of your Tupunas. They are marching beside you. Move over, and make room."
From the sea and sand of the Northern beaches to the streets of Auckland and on past the rivers and streams, hills and mountains of the North Island before ending up on the steps of Parliament the hikoi will carry the message that Aotearoa is Not for Sale.
The future of Aotearoa belongs to those who march against the Government this Autumn. The people of Hope Street, Aotearoa, who are standing up and fighting back. Maori and Pakeha, young and old, worker, student and politician, formed by everything that is good from this small, remote country - sunshine and strength, good sense and patience. They will march into history. 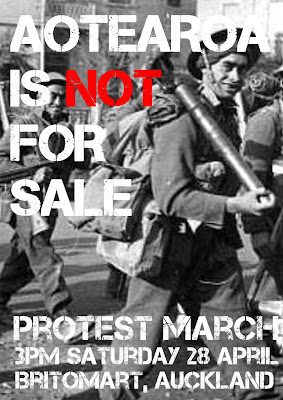