What's happening to our health system? 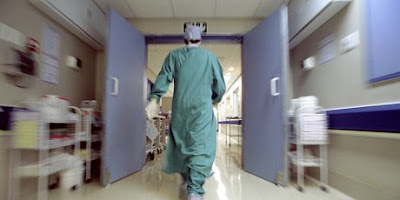 Big business wants to operate on our public health system
The National Government's attacks on public services are beginning to take their toll around the country and nowhere is this more apparent than in healthcare.
The corporate agenda in healthcare in the 1990s was to attack the public health system through closures and underfunding and to open up the public system to increased privatisation bit by bit. The aim of the "more market reforms" of the health system in the 1980s and 1990s driven by the Business Roundtable's Alan Gibbs was to create a fully privatised, US-style healthcare system in New Zealand. The reforms were deeply unpopular, provoked widespread protest, mass strikes and eventually unwound by the Labour-Alliance Government in 1999.
Twenty four years after the Gibbs report Unshackling the Hospitals first recommended introducing commercial imperatives into the health sector, these reforms are being revamped by John Key's Government as the Nats become increasing ambitious about their ability to sell off public schools, prisons and hospitals in their second term. 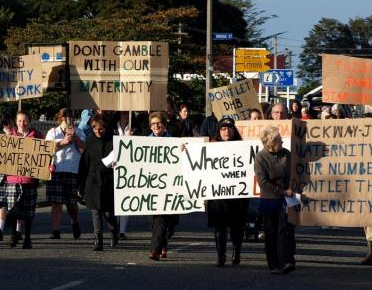 "Don't Gamble With Our Maternity"
Cuts to services
Cuts to provincial healthcare services are accelerating and maternity services are the first to be attacked.
In Whanganui on Friday 300 people marched against the proposal to move acute births to Palmerston North hospital (an hour's drive away). The change would affect 400 women and their families. Locals are organising to stop the move which has led to a DHB board member resigning in protest and 1000 people marching in February and reviving the slogan of the 1990s "Health cuts don't heal". The cut has been blamed by the doctors' union on a "health specialist workforce crisis" created by "health bosses twiddling their thumbs". Ex-Mayor Michael Laws has used an OIA request to reveal that health managers created the proposal to move the services as a "highly sophisticated campaign" to push the change through by allowing no alternatives to be debated.
In Tuatapere in western Southland locals marched in support of their maternity services on Wednesday. The local health trust has vowed to keep services open as the small community rallies against the cuts. Southland Times reported,

First-time mum Jenna Holland, 21, said it was upsetting the maternity centre was being closed and it would make it harder for new mums in the area. It was at least an hour from Tuatapere to Invercargill and it was not comfortable travelling during labour, she said.

The signficiance of the community protest is best shown by comments from one local, "This is not just a protest. It is an event in the history of Tuatapere," Stan Hammond said. "I can't remember something like this in 60 years where so many people have turned out to have their say on something. It's very, very rare. Rural people just don't protest." 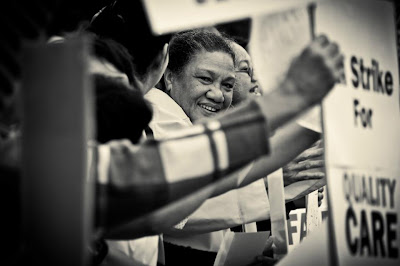 Resistance to the corporatisation agenda and proposals for alternative solutions is coming first from the health professionals and unions who work in the public sector. Tim Parke, clinical director at Auckland City hospital, wrote in a recent column, "The solution to rising healthcare costs in tough economic times is not, as some vested interests would increasingly have you believe, to maximise the number of people using the private health sector. As a public hospital emergency specialist, I fear that expanding private healthcare may instead fragment and irretrievably damage an effective public system, resulting in the country as a whole paying more for potentially worse healthcare."
Underfunding
Nurses have been in the media lately as increasingly underfunded DHBs look to cut jobs. Cuts to nurses jobs across Hawke's Bay, Bay of Plenty, Waikato and Auckland are looming or are already in the pipeline. The attacks on frontline services come as National repairs the deficit it created with tax cuts for the rich via health cuts and increasing workloads. The Herald reports,

NZNO chief executive Geoff Annals said the Hawke's Bay and Bay of Plenty job losses made a mockery of Health Minister Tony Ryall's mantra that no frontline jobs would go.

"We are hearing of nursing job cuts around the country, in both hospitals and the community. Frontline nursing jobs are going, as the government puts the pressure on DHBs to meet budget targets. What this will mean is greater health costs down the track, as people did not get the care they needed, when they needed it," Mr Annals said. 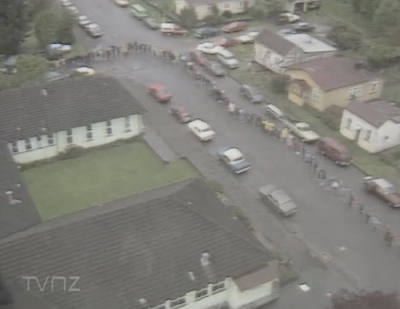 Striking back
Cuts to services, corporatisation and underfunding in the health sector are all deeply unpopular and the Government will have an uphill battle selling the neo-liberal health agenda to provincial communities, patients and the health sector unions.

But the private health industry wants to run down the public system to increase its slice of the private health insurance market and the National Party is enthusiastically wielding the austerity knife in hospital wards around the country in order to achieve this. The Government will attempt to pick off health unions and rural communities one by one. Small communities, patients and health workers shouldn't be left to fight the Government on their own. This is a broader struggle about keeping money out of medicine that must involve all of the working class whether around hospitals, Pharmac or ACC.
Retaining a high quality, publicly owned, health system where workers and patients have rights is the job of all of us. But it's time for the union movement to stop just complaining and start striking back against the Government's attacks on the health system by organising their members and the community to fight back. Direct action, both community protest and strikes, can beat these cuts and beat back the corporatisation programme.

In the 1980s and 1990s Labour and National closed scores of hospitals around the country as the private health industry boomed. The closures and cutbacks sparked the largest protests the country has ever seen with the entire populations of small towns like Kaitaia and Gore turning out in defence of their hospitals, often succesfully.

If there's any proof that direct action and community mobilisation are the best weapons against health sector cuts it is Reefton hospital on the South Island's West Coast. In the late 1980s the hospital was slated for closure. The community marched 3000 strong in the rain behind contingents of the unionised miners and forestry workers. Their message to the Government was - if you try and move out the patients, a siren will go off in the town, and within minutes thousands of people will be at the hospital to physically prevent the move. Thus the patients were never moved and Reefton hospital remains open, still healing the people who rallied to save it.