What parliament does, the streets can undo 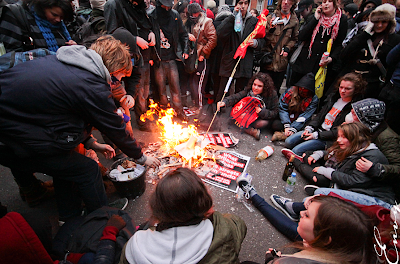 In the next three years the attacks of the National Government are going to come thick and fast. Cuts to social welfare. Evictions of state home tenants. Privatisation. Charter schools. Farm sell offs. Attacks on workers' rights. Fracking and deep sea oil drilling. Opening up ACC to private providers. Understaffing health boards.As the Government attacks on one front, the bosses attack on another. Driving down wages. Demanding casualisation. Crushing unions through lock outs.All of this will have a combined effect of demoralising the working class. A demoralised population who don't fight back is just what the Nats want. Screw them down further, demand their big business backers.
Some people give up the fight. Suicide rates are up, especially amongst children. 37,000 left for Australia last year. Apparently you are more likely to be happy if you support the National Party. Exodus. For those who have not lived through a National Government before, for those who can't remember the last recession, it can seem like Aotearoa is becoming a society without Summer. Despair and sectarianism, two sides of the same apathetic coin can set in.

Yet the National Government's austerity programme and the bosses offensive relies on the assumption that the working class will not resist, that unionists will not stand together and that they can push through their agenda before the next election.

Mass revolt can stop the Nats. Can we unite even a few thousand of the 70,000 state house tenants into a tenants association pledged to resist evictions and the sell off of homes? Maybe. Can secondary school walkouts stop charter schools? Possibly. Can strikes beat off the bosses' offensive? Yes.
But we aren't delusional, we know the left won't be able to win every time we fight. But we're not going to sit around like some lefties bleating on about how terrible the situation is, because we already know that! We're going to get stuck in wherever we can, whenever we can. We can win some of the time, but only if we fight. With every cut, with every attack, the left must unite together and fight. If we can hurt the Government, slow the bosses down or soften the blow that's good. If we can win that is even better. However every fight is about the next fight. Campaigns come and go, fury in one place might fade away as it picks up elsewhere. As Noam Chomsky said, “If you go to one demonstration and then go home, that's something, but the people in power can live with that. What they can't live with is sustained pressure that keeps building, organisations that keep doing things, people that keep learning lessons from the last time and doing it better the next time.”

That's why we always build Mana in the struggle, a united front of Maori and Pakeha leftists with a Parliamentary presence and branches around the motu. Yet in the heart of the struggle, behind the barricades of an occupied university, on a picket line during a wintery night, in a reclaimed state house are people who in changing the world, change themselves. They get a taste of the power of a mass movement to change the world. They see the need for an economic system based on people not profit. These people will join a revolutionary organisation like Socialist Aotearoa and help build in other places, at other times the mass movements that can beat the Nats. That's what Socialist Aotearoa aims to be, an organisation that keeps doing things, with people that keep learning lessons and doing it better next time.

People make their own history but not under circumstances of their own choosing. It's not called struggle because it's easy. Yet many hands make light work. We don't need activist superheros who burn out and drift away. We need organisers of revolt who inspire resistance. One person can build a barricade but when the cops come you'll need a hundred to defend it. Everyone has a contribution to make however large or small. Some revolutionaries can manage lives of hyperactivism. Others have to take a steadier pace, balancing childcare, study and work responsibilities. Everyone needs the occasional rest and relaxation, away from the front line of the the struggle. As Lana Del Rey sings "The road is long, we carry on. Try to have fun in the meantime". A company that spends too much time in the trenches will inevitably suffer desertions and higher rates of shell shock. An army that never fights, like some political parties, soon forgets how to. A party that doesn't rally their members to fight the Nats on the streets and in the workplaces is an opposition in words only.

Nothing is more absurd than trying to stop asset sales or evictions through signing petitions or lobbying Crown Ministers. You can't win a strike through media coverage alone. Ending poverty means ending unemployment. We won't stop the Nats unless we can tip the balance of class forces back the way of working people. That means building Aotearoa is Not for Sale on the streets, in the workplaces and the campuses to unite the resistance. On Saturday 28 April we need to turn out thousands of people against this Government. From there we need to know who will commit to picketing charter schools, occupying power stations and barricading state houses. It is time to mobilise, to organise and to agitate.
What parliament does, the streets can undo. 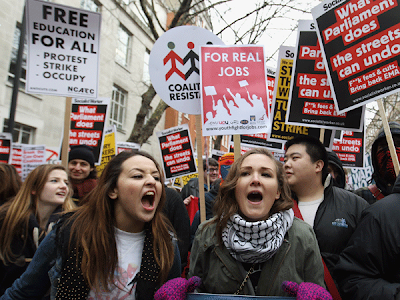