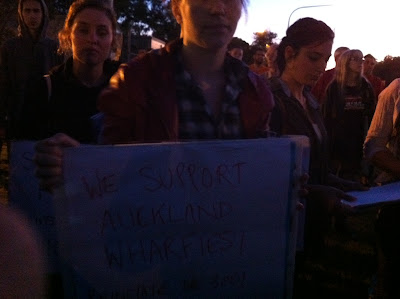 Approximately 30 ships have been scheduled to call at the Port of Auckland while the workers have been on strike. All but three diverted their voyages to nearby ports. However, the massive and very profitable shipping company Maersk sent two large container ships into Auckland to be worked by scabs.
One of the ships, the Maersk Brani, arrived in Sydney at 6.30am on Saturday March 10, direct from Auckland. Cranes at the DP World container terminal were silent all day and into the night as workers stayed outside the gate while Unions NSW, teachers, firefighters and students organised a community picket to protest the actions of the Port of Auckland and Maersk. The second ship, the Maersk Aberdeen, is due to arrive at Sydney’s Patricks terminal at 8pm Monday 12 March. It has already been met with pickets and protests in Wellington and Tauranga.
Workers’ rights are under attack all over the world. The brave stand taken by Sydney’s wharfies and community picketers must be supported by the whole trade union movement.
It is likely that the employers will try to attack the Maritime Union of Australia (MUA) with the full force of Australia’s industrial relations laws that still make it a crime for workers and community members to support each other in struggle. The union could face fines of millions of dollars. Three hundred families in Auckland face being left without an income—and New Zealand wharfies face losing their union. This is a battle we have to win.
James, Solidarity Australia
Paul McAleer, Sydney branch secretary of the MUA gives an inspirational speech! 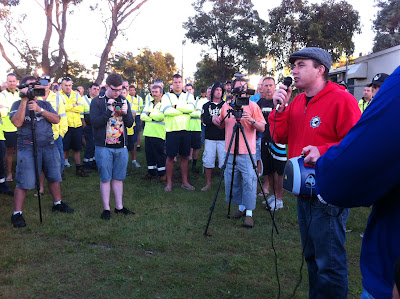 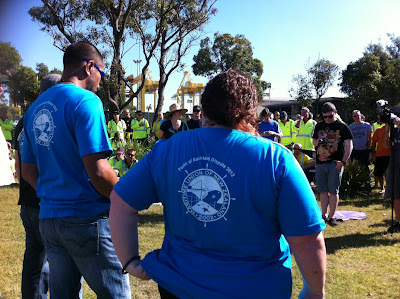