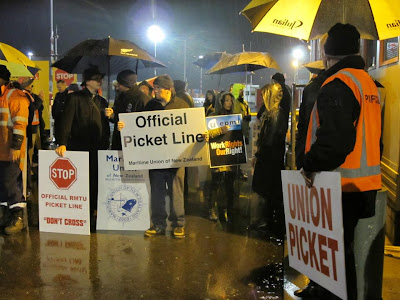 The industrial action at the Port of Auckland is spreading to other cities, as workers at Centreport Wellington are refusing to move containers on the Maersk Aberdeen because non-union staff worked the ship when it was docked in Auckland. Workers also protested early this morning outside Tauranga Port.
“Make the vessel leave the Port of Wellington, send it back to Auckland, get it loaded by union labour and then it can go on its merry way,” says Maritime Union General Secretary, Joe Fleetwood. 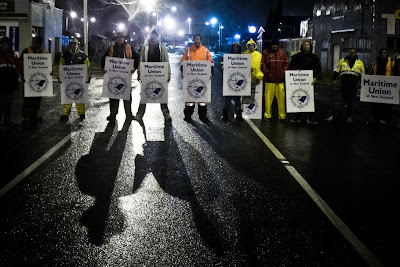 International Transport Federation affiliated unions held a protest at the Ports of Tauranga at 2am on Saturday 3 March 2012 in torrential rain. A Maersk ship loaded by non-union workers in Auckland, where the Maritime Union is striking, was seeking to unload at the Port of Tauranga. Seamen, wharfies and retirees joined the protest from the ITF affiliated unions: Maritime Union of New Zealand, the Rail and Maritime Union and First Union (formally the Northern Drivers Union). RMTU crane drivers refused to cross the protest citing health and safety concerns.
Strikes Unions