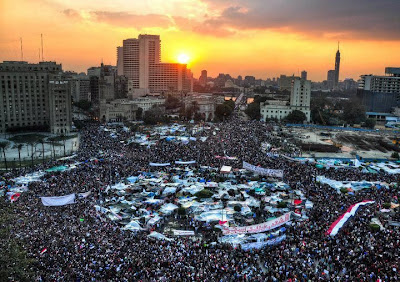 Revolution 2.0: Sunset for the military dictatorship. 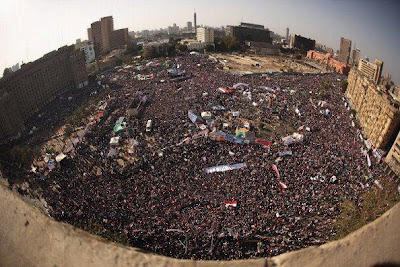 Millions return to Tahrir on the anniversary of the #Jan25 revolution against Mubarak. 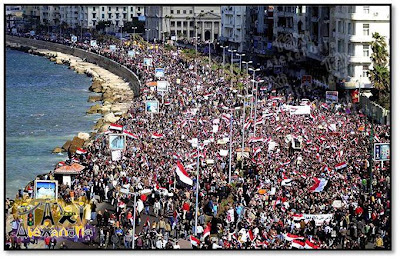 In Alexandria the revolution continues. 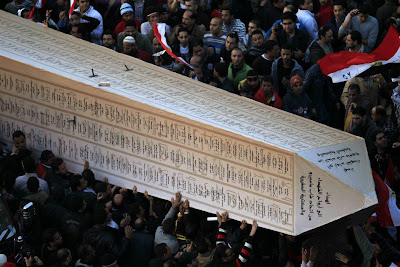 A monument inscribed with the names of the martyrs. 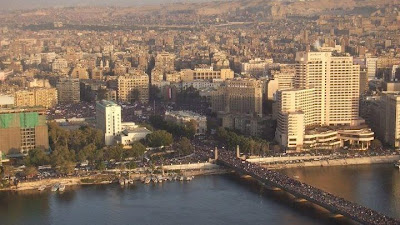 The bridges of Cairo are lined with people. 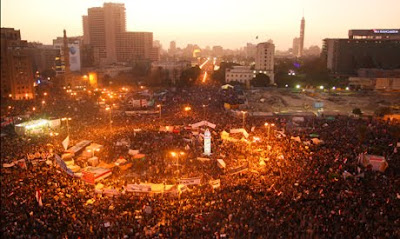 Tahrir square at dusk.
Kevin Coval - All the pharoahs must fall by Hossam El-Hamalawy

A year on from the Egyptian Revolution: Socialist Worker editor reports from Tahrir Square

Socialist Worker editor Judith Orr reports from Tahrir Square in Cairo on a day of protest and celebration, a year after the fall of Hosni Mubarak

Today has seen a massive mobilisation in Cairo. And the news from Suez and Alexandria and other Egyptian cities is of huge demonstrations there too.

This has been another historic day in a year of historic moments in Egypt.

Scaf wanted a day that would be about the achievements of the revolution, which they think they can take credit for.

They wanted everything to settle down and for people to accept that the revolution was over.

But that is not what happened today. If anything, people were reminded of all the hopes and dreams they had held when they set out to challenge Mubarak's dictatorship.

All day people repeated the phrase, "We need to complete the revolution." The concessions the military have already made, such as lifting the long hated emergency laws, are not enough.

Field Marshall Tantawi, the head of Scaf,has made it clear that the emergency laws will remain in place to prevent "acts of thuggery".

As university teacher Mohammed pointed out, "Scaf refers to strikes as 'thuggish'. We know they want to target workers who take action against their bosses."

Workers' struggles are picking up again. Today was a public holiday, so the next days and weeks will be critical to see if the workers' movement can drive the revolution forward.

Parliament has already become a focus for discontent. Activists predict that workers and the poor will increasingly organise protests there.

It's coming up to 1am in Cairo. There is still a roar of noise from Tahir Square as thousands remain there and in the surrounding streets. Many have bedded down in doorways and on scraps of grass on traffic islands. They don't want to go home.

No one knows what tomorrow will bring. But one thing is certain. Whatever the military or government say, the people have spoken once again. This revolution is not over.

There has been debate all day about what to do next. Some want protesters to "stay in Tahrir Square until Scaf goes". Meanwhile the Muslim Brotherhood and Salfist organisations are calling for people to "celebrate – and then go home".

Whether or not staying in square would work would depend on numbers and on what demands were put up, argues Manar, a revolutionary socialist.

She adds that the revolution is not solely about the square: "The revolution needs to be made everywhere, not just in Tahrir." The slogan used by The Socialist newspaper is: "The square and the factory are one hand".

A large group of protesters have set up an angry demonstration outside the state TV building at Maspero, just along the corniche from the entrance to Tahrir Square.

"The TV station is important for every dictaorship," says Khled Ali, a doctor in philosophy. "It's a way of controlling the people. Nothing has changed here since the first 25 January – it's the same people, the same words."

The army is protecting the TV building behind barbed wire. Troops stare impassively at the protesters. Traffic passing along the corniche toot their horns in support of the protest.

Veteran socialist Kamal Khalil is here. He told me that the military is the problem – they are part of Mubarak's regime.

"Scaf wants to make it difficult for workers to organise unions," he says. "They keep putting obstacles on our way. They want to make sit-ins illegal.

"But the Egyptian revolution can still be won if workers get organised and fight. We need political strikes where every worker stops and refuses to work until we achieve victory."

The temperature has fallen now that it's getting dark, but the day is far from over. People have laid out newspapers where they are to talk, rest and eat. Every bit of rubble can act as a stool. People weave around the impromptu meetings trying not to disturb them.

About 20 young people have sat down in the pavement opposite the Egyptian museum. "We're here because we are the people who started the revolution, the young people," says Youssef, a student, and his sister Rodino, who is at high school.

"It's been too slow. It feels like nothing has changed. This was a revolution for the poor, but so far the poor have not won. We need a completely different system. Better pay, better healthcare, better public transport. That's what today is about. That's what still needs to happen."

A dense march of football supporters, known as the ‘Ultras’, goes up Talaat Harb Street, one of the main streets leading into Tahrir Square.

Many of them had played heroic roles in the street battles against Mubarak’s forces.

Today they shout the slogan of one year ago—"Bread, freedom, justice".

Amina is watching from the side. "They are using the same slogan because we have not won yet. The army council is crushing us. We need a second revolution

"I don't like what is happening after the elections. I am a Muslim, I wear a headscarf, but I do not want an Islamic state. We have 8 million Christians in Egypt. What will happen to them?

“We need an Egypt for everyone. It's not just about political changes—We need social change. Better education, health care. That's why we are still on the streets.”

It is getting very difficult to move around the square because the numbers are so enormous.

Time and time again people say, "This is not a celebration". One young man, Ahmed, stands solid against the crowd surging around him. His face is painted in the colours of the Egyptian flag. He holds up a sign calling for justice for those who have been killed in last 12 months.

He said, "I'm here to remind people about those who died. They are the real heroes. They died because they believed in a better Egypt. That's not too much to ask is it?"

Just off the square the newly painted wall of the American University is getting a makeover. Teams of young graffiti artists are spraying anti-Scaf slogans while older demonstrators sit on the pavement edge beside them resting their legs.

The volunteers who are searching people as they arrive in Tahrir Square struggle to keep up.

Is there anyone in Cairo not out in the streets today?

Every avenue leading to Tahrir Square is filled with people chanting and marching.

Already there is debate about what will happen when the day is over.

The Salafists and some leaders of the Muslim Brotherhood are saying that people should celebrate then go home.

State television and the channel which supports Scaf say its a day of celebration and then everything should go back to normal—whatever normal means in Egypt under military rule.

If the numbers are big enough then maybe there will be a new sit in. But, say activists, "The revolution is not just the square it is in the factories and in the universities."

The struggle for the future of the revolution has to go on in every workplace, school and community.

People buying copies of their paper and taking leaflets surround the RS stall. There are also leaflets to fill in if you want to join their organisation.

The sun is shining in Tahrir Square. People are starting to arrive—families with food and blankets, people in wheelchairs, children in buggies.

Scooters piled high with bread and water squeeze past to stock up the stalls in the square.

Everyone is searched and ID checked by volunteers as they enter. Several stages have been constructed overnight and some sound systems are already at full tilt, playing music and speeches.

Around the city at least 12 different demonstrations are assembling to march to the square.

Only one year ago Hosni Mubarak sat in power, fully expecting that he and then his son would continue to rule for decades to come.

Now he and his son are in prison and protesters delight in mocking his image. This day last year the people lost their fear and took to the streets and held them.

It took only 18 days to finish Mubarak. But on 25 January 2011 the Egyptian people began something that they still want to finish.

I speak to Mahmoud, a young man who has brought with him a blood soaked T-shirt from the battles on 28 January. “We have not come here to carnival and then depart,” he tells me.

“We want to complete our revolution. Mubarak is down but the system is not."

So they are coming back to Tahrir in their tens of thousands to show they still have the power to break the rest of the regime.

The following should be read alongside this article:

Egypt's Revolutionary Socialists: We want to expose the lies of the elites

© Socialist Worker (unless otherwise stated). You may republish if you include an active link to the original.