Right to protest | Right to camp 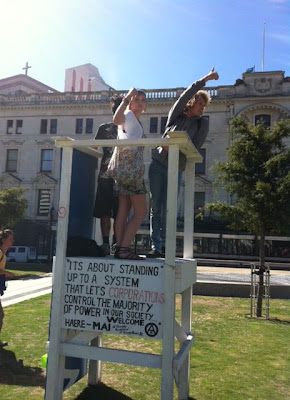 Occupy Auckland on day 101 - still camping, still protesting.
On day 101 they came in the morning. Dozens of police officers and private security guards. The identification numbers were the same on up to four of the officers. They cops were ready for a day of massive violence against the peaceful Occupy protesters.
Since the election the Occupy protesters have been vilified by the right-wing, unloved by much of the vacillating left yet still scores of young (and old) activists have spent night after night holding the ground in Aotea Square and now Queen Street, Victoria Park and Albert Park.
There are now two main types of Occupiers in Auckland City. The radical youth; many jobless, others studying, some workers whose minds were set on fire by the revolutions of 2011 and the Occupy Wall Street movement. They have consistently shown solidarity with those engaged in struggle, from the campaign against evictions in Glen Innes to attending last weeks mass meeting in support of the wharfies. They are the future of the left in this city and today if Len Brown was watching out his window he would have seen them pulling down the fences his goons were sent to erect.
The other type of Occupier like Roger are those who once described themselves as homeless. They are predominantly Maori, reflecting Auckland's shameful homeless statistic - 80% of homeless are Maori. Through Occupy they have begun self-organising for their own security, cooking and shelter based primarily on tikanga. People are even growing their own vegetables. They have created in Auckland what were known as Hoovervilles in America during the 1930s depression - a refuge of last resort for those thrown into the abyss of neo-liberalism.
Socialist Aotearoa activist Malcolm France and Occupier Lyn were today arrested for defending Occupy Auckland. Occupy stalwart Chris Glen was also nicked by police when he tried to take the protest to Len Brown in the council chambers, left, was dragged back by the cops and then was trespassed. Socialist Aotearoa mobilised in support of the Occupation today and many of our members physically helped stop the eviction. We unconditionally support the right of people to occupy and protest the inequalities of capitalism and we wholeheartedly support the right of the city's homeless people to build and maintain their own camps on public land. Right to protest. Right to camp. We're right to occupy.
John Minto has already rubbised Len Brown and the Auckland City Council's slurs against Occupy - "That's just bulls**t. That's just lies - rubbish. They'd just prefer not to have banners and placards in parks."
The eviction has backfired heavily in the media on police and council and the Occupation has been strengthened as a result. As Joe Carolan, Socialist Aotearoa activist told the media, "You can't close down an idea using the police. What this movement is about is not just camping, it's not just about occupying a space of land, this is actually questioning why there is such injustice and economic inequality in western society as a whole.''
Adbusters editor-in-chief Kalle Lasn spoke recently of Occupy's prospects; 'To me, the core impulse behind this movement is the feeling among young people all over the world that the future doesn’t compute, that their lives will be full of ecological, political and financial crises, and that they will never have a life like their parents did. And unless they stand up and fight for a different kind of a future, they’re not going to have a future.'
The sparks that fly as the police hammer cracks down on the council anvil have already burnt the police and reignited anti-capitalist resistance in central Auckland. Hope will turn to anger for those whose future does not compute. In 2012 the rebel alliance in Auckland's parks and around the world will need to think hard about how to advance their struggle against death-star capitalism.
Occupy Auckland is not over yet.
-Socialist Aotearoa 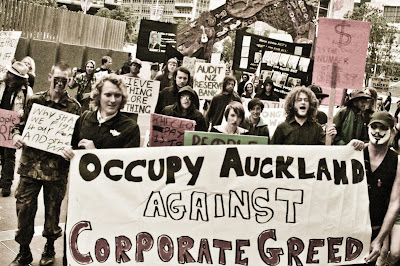