Revolution's on the wall in Fiji 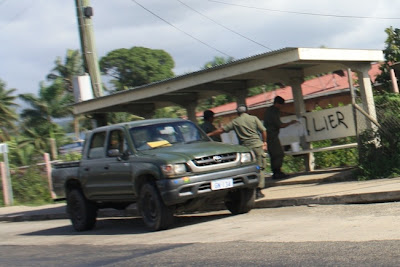 [Since Saturday] Fiji's military regime has detained a leading trade unionist and says he will face unspecified charges soon while they look for others.

Fiji Trade Union Congress president Daniel Urai Manufolau was taken as he arrived off an aircraft at Nadi International Airport on Saturday, returning from a Commonwealth meeting in Perth.

In a statement it says Urai "is being questioned on various issues relating to ongoing criminal investigations".

The criminal investigations and the detention of Fiji's union leader relate to graffiti alongside the Nausori-Suva road saying "PM out you lier" (sic), "RFMF remove Frank ... VRT" and "PM your time is over". Daniel joins five other political prisoners in Fiji being held for seditious graffiti.
As the military regime of Frank Bainimarama grows ever more brutal and repressive an underground movement calling itself the Viti Revolutionary Forces is springing up agitating for elections and an end to military rule and the crackdown on churches and unions. The activists have also burnt down police stations and hacked the Vodafone network, getting a text sent to people calling for "passive resistance".
The regime hates this graffiti and the revolutionaries behind it,

Intelligence sources say Fiji's dictator, Frank Bainimarama, gave a clear directive to his personal bodyguards, loyalist and to the police commissioner: "Cut their fucking hands off, no court cases – make an example."
As a result a 12 year old boy had his three fingers broken by soldiers in Lami after he was found tagging a bus shelter with anti-Bainimarama sentiment.

With limited media freedoms, covert action and online are one of the only ways of spreading news and information freely. As a former Fijian human rights commisioner has noted,

Well I think it's the same as Iraq and, you know, we have censorship of the media, either censored from the military, from the police, from the minister of information who is regularly checking out stories and so on and newsletters and things that are distributed locally.

Workers' rights are now non-existent in this Pacific paradise. As the Australian Council of Trade Unions has listed of new emergency laws- unions are not allowed to represent members, collective agreements are void, strikes are illegal and all minimum wages, work conditions and overtime rates have been scrapped.
This is in a country where up to 60 percent of the population live in poverty and over 15 percent of the population (125,000) live in 200 informal and squatter settlements. Economic factors may be a key galvanising factor for revolutionaries, just as they were during the Egyptian revolution. Multinational corporations reaping massive profits amidst widespread poverty ultimately dig their own graves and the Pacific has a long history of rebellion and revolution, including Tonga's 2006 anti-government strikes and riot.
Meanwhile big Australian and New Zealand corporations like QANTAS are collaborating with the military state to drive down wages as are big Chinese firms muscling in to sectors like mining in Fiji as the anti-worker, pro-corporate International Monetary Fund cheers from the sidelines. In fact a QANTAS subsidiary, Air Pacific, essentially wrote the new anti-union laws, as Socialist Alternative in Australia have highlighted. Last year a Fijian democracy activist due to be forcibly deported from Australia jumped to his death in an Australian detention center. A victim of the racist immigration policies that countries like Australia and New Zealand enforce with our Pacific cousins, and that the Mana Movement opposes.
Censored by the thugs of Bainimarama's regime graffiti is one of the ways that an insurgent social movement against the regime can begin to mobilise and the harsh response of the regime to the rebels in turn will only radicalise and grow the opposition. Sooner rather than later struggle between the Fijian people and the state will boil over and street protests and strikes will begin. As Aussie unions prepare for a tourism and retail boycott of Fiji, the left in Aotearoa should also begin to turn up the tempo, strangling the regime economically and supporting the Fijian union movement's fight back politically. The New Zealand Council of Trade Unions must stand up and call for this boycott as well and look at other ways of fighting the dictatorship.
The writing is on the wall in Fiji. Time for revolution is drawing near. 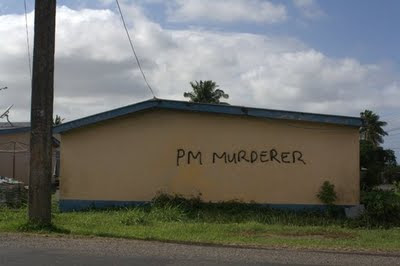