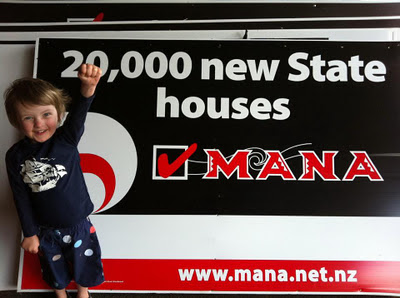 Ms Bradford says when Housing New Zealand tenants were asked to move temporarily while a redevelopment project was carried out, they were promised they could move back into the area once the project was completed.

'Then National was elected into government. They broke that promise and told residents they couldn't come back because they are cutting back on the number of state houses in the area.

'Some of these tenants have been living in this community for three generations. They were born there, it's where their friends and family live, it's their community and it's where they feel they belong.

'I believe the National Government neither knows nor cares how traumatic this is for the families concerned.

'It seems that they just don't give a toss about people who are not like them.'

Ms Bradford says some of the housing in question is on one of the last waterfront areas that is still in public housing.

'It appears that the temptation to hand it over to their rich mates in the private sector was just too much for the Nats," said Ms Bradford.

'This is an exceptionally callous act, even by National Party standards.

"Mana supports the Glen Innes tenants in their struggle to be treated fairly.

'Instead of evicting state house tenants, Mana says we should build 20,000 new state houses over the next two years.

'This would provide badly needed jobs and housing at a time when the economy needs a shot in the arm.

'We also back the pledge originally made to the tenants. The next Government should honour that promise and ensure that tenants are rehoused back in their own community.

Sue Bradford is the Mana candidate for Waitakere, national spokesperson for Mana on Housing.