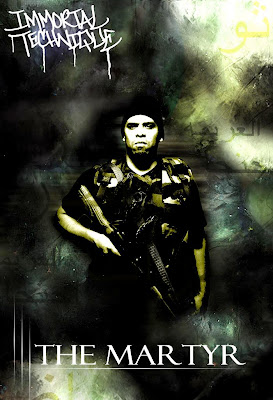 IMMORTAL TECHNIQUE with special guests Akir & Poison Pen and local support from DJ Substance on Friday 20th January at The Studio, Karangahape rd.
After many attempts over the years, Immortal Technique will finally bring his raw political commentary to New Zealand in January 2012.
Born in a military hospital in Peru, Immortal Technique moved to Harlem, New York with his family in the early 80's. Here, he became captivated with Hip Hop culture, writing graffiti and discovering his passion for rhyming. After some trouble with the law, he spent a year in prison, where he began to prolifically write down his ideas about what he had lived and seen in the struggle of New York and his visits back to his native land. On parole, he attended political science classes while selling his music on the streets. During this time he built his reputation as a ferocious battle emcee, winning numerous freestyle rap competitions in the underground hip hop scene.
In 2001, Tech released his debut album “Revolutionary Vol. 1” which was completely self-funded by his rap battle triumphs. In 2002 The Source magazine featured him in their “Unsigned Hype” column. The following year, he released “Revolutionary Vol. 2” and became the only unsigned rapper to feature in The Source’s “Hip Hop Quotable” column for his song “Industrial Revolution”. In 2008 Tech paired up with DJ Green Lantern to release “The 3rd World” – Urb magazine gave it 4 out of 5 stars and XXL magazine termed it ”Pure, unadulterated rebel music”.

A cross between Che Guevara, Chuck D and Fela Kuti, his lyrics focus on controversial issues in global politics. The views expressed are predominantly commentary on issues such as class struggle, poverty, religion, government and institutional racism. He has donated his time and influence to many causes, including building an orphanage in Afghanistan, and more recently has been a vocal part in the Occupy Wall Street movement.

Joining Immortal Technique on his Australian/NZ tour are his partners-in-rhyme, Akir and Poison Pen. Tech’s label mate, Akir (acronym for Always Keep it Real) is a producer and songwriter known for his complex lyrics and social-political content. The Brooklyn born and raised, son of a preacher man, Poison Pen is one of the founding members of the rap indie click Stronghold, alongside Breez Evaflowin’, C Rayz Walz and Immortal Technique.