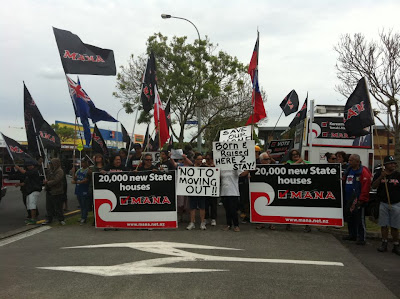 In the working class suburb of Glen Innes 160 families are preparing to resist mass evictions as Housing New Zealand (HNZ) moves to sell off huge blocks of state housing land to private developers.
The struggle has been bubbling away in Glen Innes for some months and several protests have been held but now community opposition is building as family after family pledge to stay in their homes and resist the evictions. At a public meeting held at the end of the November an action committee was formed and a march on Town Hall is being planned for 10 December to send a message to the Government and Len Brown's city council that working class families will not not be moved from their homes. During the heated meeting it was revealed that the Chairperson of the project to "redevelop" the land into private sections was also the branch President of the local National Party. Tenants shouted loudly for her resignation.
Many of the residents described to the HNZ reps what the real consequences of forcing families from their homes would be through intimidation tactics. Elderly people would be cut off from the communities they had lived and worked in all their lives. Disabled people would be further isolated from their friends and support networks. Children would be forced to move schools as families were relocated as far away as South Auckland.
Pacific communities who came in the 1970s and who have supported each other through thick and thin would be broken up and seperated from the community facilities like swimming pools and churches that they have fundraised for and looked after. One woman recounted how as a kid she had collected bottles for the swimming pool. Other residents talked about how it would break up families as people were forced into smaller accomodation losing their families homes. Maori tenants talked about being seperated from their local marae which is where they go when they are "Hungry, cold or have had their power cut off." The evictions will cut people off from their community.
During the meeting every speaker who called for civil disobedience against the evictions was given big cheers. One speaker described how residents will be foreced into high rise units, "Ghetto B", referring to the arbitrary division of the community into "A" zone which will be privatised and "B" zone which will be overcrowded and underresourced.
When state houses were originally built they were designed to be "Homes fit for Cabinet Ministers" in keeping with the egalitarian aims of the 1935 first Labour Government of Michael Joseph Savage. These homes were built with kitchens in the east so the hard working people of Aotearoa could wake with the sun on their face. Soldiers coming home from war were given these houses and told they could live there for as long as they wanted. Some of those old soldiers are sstill living in their home, like the partner of housing activist Sue Henry.
Other speakers discussed the National Party's plan to roll these privatisation plans out around Auckland and that they had Mangere in their sights next. Mangere, we heard, is already rolling, getting organised to fight the evictions too. Local residents who were also members of the State Housing Action Coalition formed to fight evictions in the 1990s talked about the need for unity, direct action and not to trust the HNZ bureaucrats.
Mana Movement activist John Minto pledged his support to the meeting and called for a march to bring the issues of housing to national attention. This was agreed to and is planned for Saturday 10 December, meeting at 12noon at Britomart, in Auckland CBD. Join the resistance. March against the evictions and let's together save Auckland's communities from privatisation.
Email aksocialistaotearoa@gmail.com to get involved.
Auckland Housing Mana Party