Who will fight the evictions? Who will organise the hood? 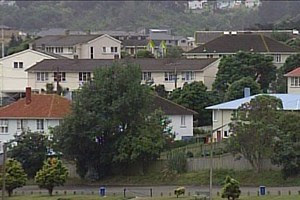 News that 156 families of state house tenants are due to be evicted in Glen Innes, Auckland is cause for serious concern.
In Gisborne, anti-poverty campaigner and city councillor Manu Caddie, 'says he has already counted a dozen empty homes in his neighbourhood while Housing New Zealand says it has a waiting list with dozens of families on it.'
The clock has been wound back to the 1990s. In 1999 the National government was selling one state house every four and a half hours according to official figures and some 2,000 houses were vacant. As one Labour MP put it at the end of the neo-liberal experiment in housing,
"National's market rents experiment and its sell-off of State houses saw State rents soar by 106 percent, and the housing stock fall by more than 11,000 properties. For low-income tenants this led to overcrowded housing, financial hardship, and poverty-related diseases."
In the 1990s almost every social agency working with poor people cited the government's callous and cruel housing policies as the trigger for disease and deprivation. It is sickening then that with the country's media focused on the RWC, National is rolling back the state in housing,

The agency has also axed work in its eight "community renewal" projects in the Auckland suburbs of Northcote, Talbot Park, Wiri and Clendon and in Otangarei (Whangarei), Fordlands (Rotorua), Porirua East (Wellington) and Aranui (Christchurch).
"The corporation will continue to deliver tenancy management services in these areas, but there will be no new funding for community development," it said.

John McCarthy, social services manager for the Methodist Mission's Lifewise agency which looks after Auckland's homeless, said the changes would drive more vulnerable tenants on to the streets.

"The great risk for organisations like us and others working in the area of homelessness and emergency accommodation is that we are going to see more people in Housing NZ poorly supported, which will put more tenancies at risk, result in more evictions and more people coming out of Housing NZ accommodation and potentially more homelessness," he said.

New Zealand has a full blown housing crisis alongside the crisis of poverty afflicting our working class suburbs. In 'two suburbs alone is almost a thousand people in that high needs category' on the state house waiting list. 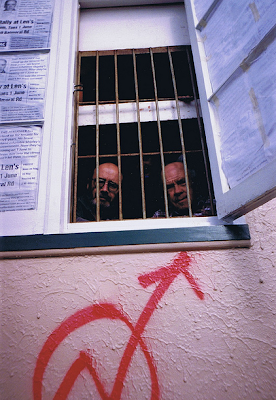 For months in 1999 SHAC occupied a barricaded Sandringham state house in an act of defiance against market rents. Soon to be Deputy Prime Minister Jim Anderton took time out from his electoral campaign to show support.
The anti-capitalist left in New Zealand has a proud history of supporting state house tenants under attack from National. Throughout the 1990s the Socialist Workers Organisation-led State Housing Action Coalition led the struggle against evictions, house sales and market rents. They were incredibly successful. Dozens of evictions were stayed, market rents were boycotted by hundreds of tenants and in 1999, market rents was quickly axed by the Labour-Alliance Government.
Last year during the Mana by-election, four activists were arrested during an occupation of an empty state house to highlight homelessness and the need for more better housing. The 'stunt' gained nationwide headlines for Matt McCarten, much like the campaign actions of SHAC in the 1990s and pushed HNZ and the National Government onto the defensive. Importantly it also began to create a pool of support within the state housing community in Porirua for Matt McCarten's campaign.
With the state rolling back its involvement with the state housing community, alongside privatisation of state houses and deregulation of the housing market the questions must be asked, 'Who will fight the evictions? Who will organise the hood?'
Since the Mana by-election, and since the SHAC campaign of the 1990s, the left has never been in a better position to fight evictions and engage in large scale community organising with the state housing community for better housing and social services. In south Auckland one third of residents live in state houses. Through the MANA movement, with branches across Aotearoa we have the potential to reach out to tens of thousands of state house tenants and provide solidarity and support in the coming weeks and months ahead. Small fights over evictions can turn into bigger fights against the Government. Mana's policy of building twenty thousand state houses in it's first two years is audacious enough to inspire confidence and rebellion within tenants hearts. We need to take this message out into the community.
The left has always been the defender of state housing dating back to socialist MP John A. Lee, heading the initial construction in the 1930s. Look closely at a map of the state houses around Philomel Crescent and Diomede Street in Bayswater on Auckland's North Shore and you can see exactly why the right wing has always feared state housing. They fear the socialist imagination and ethic which built thousands of workers cottages. The temporal links between the Russian revolution and the planners of Savage's welfare state. When Jim Bolger and Jenny Shipley rolled out their attacks on state house tenants they feared the commitment and discipline of socialists like Peter Hughes in SHAC who led the fight back.
In 2011, Mana has the potential to link the struggle against evictions and the organisation of the state house community to a new movement that pledges 20,000 new homes and the defense of the working poor. 'Organise the hood!' 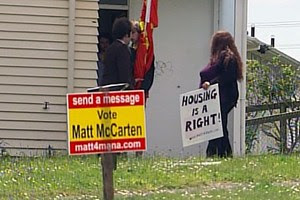 abrown said…
i know someone who was on the state housing list and specifically told HNZ that they would not accept a house in a certain street because they had young kids and the street is full of gangs and p houses. She then was offered two houses in that street and had to turn them down and ended up having to take a really crappy place because she used her two vetoes. There are numerous houses near me that are empty state houses (Stokes Valley) but because the media only likes to report crime and deaths in Low socio economic areas, no-one wants them. Its a bloody shame. I really wish Mana would look at encouraging planting of fruit trees around state housing areas too. It makes it less bleak for children growing up in state housing areas and provides free healthy food
12:07 AM