Who will back Occupy Queen Street? 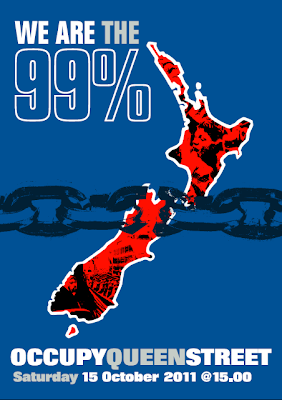 There are Facebook calls for a global demonstration on October 15 in cities in more than 25 countries stretching from Hong Kong to Buenos Aires, Dublin to Madrid.

Some protest pages show only a few dozen will attend; others have thousands. Protest pages in Spain and Italy -- two countries hard hit by the financial crisis and subsequent European Union debt woes -- have the largest Facebook attendees so far, with 42,410 and 20,568, respectively.

Occupy Wall Street started with a few hundred declaring - No more will we allow corporate greed to ruin our future. In just a few weeks the few hundred has turned to tens of thousands and lit an unquenchable fire to renew the American revolution. There are years when nothing happens, days when decades happen. With no exaggeration we can say that what happens in the days and weeks ahead will determine the fate of the planet for years to come.
In Aotearoa occupations will hit Dunedin, Christchurch, Wellington and Auckland's Queen Street. The mobilisation in Aotearoa comes hard on the heels of a major student revolt at the University of Auckland and just weeks out from a crucial general election.
Since the election of the National Act Government, massive protests of Maori, workers and environmentalists have shaken this country with anger. When tens of thousands gather in the streets and put the National Party under heat, we get a taste of our power. The sense of unity, the spirit of solidarity, the experience of being part of a mass movement is an experience that people will carry them for the rest of their lives.
At critical moments in global history revolutionary movements can come from what seems like nowhere and suddenly everything changes. When a Tunisian fruit and vegetable seller lit himself on fire he had no idea that his action would catalyse revolt from Cairo to Manhattan.
Next week we have the chance to join a worldwide movement for democracy, justice and liberation. If this movement is to make headway it will need the backing of thousands of New Zealanders and the organisational support of the country's largest democratically organised movements - the trade unions and student associations.
Every union member who supports this fight back against unemployment and low wages needs to request that their union leaders mobilise members for October 15 and afterwards and build support for the occupation in their workplace. Every student association member who believes that young people should not have to live with a lifetime of debt should call on student association Presidents to lead the resistance. We need the new generation of rangatira to lead whole iwi out into the streets to battle corporate power for the soul of Aotearoa.
We need strong organisations and tens of thousands of people to back the occupations in Aotearoa. Trade unions, students' associations and environmental groups have for decades claimed to represent the 99%. In the middle of severe economic and environmental crisis those organisations must work hard and move fast.
As Naomi Klein put it in her speech to Occupy Wall Street,

When people are panicked and desperate and no one seems to know what to do, that is the ideal time to push through their wish list of pro-corporate policies: privatizing education and social security, slashing public services, getting rid of the last constraints on corporate power. Amidst the economic crisis, this is happening the world over.
And there is only one thing that can block this tactic, and fortunately, it’s a very big thing: the 99 percent. And that 99 percent is taking to the streets from Madison to Madrid to say “No. We will not pay for your crisis.”

Some of our ancestors came on outrigger canoes across thousands of kilometers navigating only by the stars. Some of our ancestors spent months in scurvy ridden ships for a better future away from dark satanic mills. Some of our ancestors came on 747s, fleeing war and oppression, looking for jobs and opportunities. We are all together now, in the middle of the south Pacific, bound together by the promise of a better future for all people in Aotearoa. We carry our ancestors dreams of a better country in our hearts. We don't have all the answers, but we have some of the questions.
Who will back Occupy Queen Street?
Read more: Making common cause against Wall Street | OccupyWallStreet 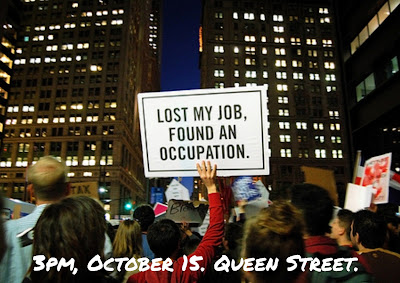