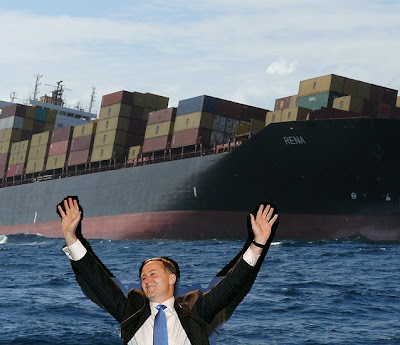 Maritime authorities are moving too slowly to contain the oil spill from the container ship grounded off the Port of Tauranga, says one of New Zealand’s leading ocean ecology groups, the Environmental Defence Society.

Forest & Bird Seabird Advocate Karen Baird said many seabird species are particularly vulnerable now because they are breeding and she questioned the initial response to the oil spill.

“We need to ask why booms were not put around this ship yesterday to contain any release of oil. The sea conditions were good and containing the spill is much better than using toxic dispersants on kilometres of oil slick,” she said.

Two leading environmental organisations are warning of the potential of a major environmental catastrophe of the Bay of Plenty as the ground Mediterranean Shipping Corp. vessel continues to spill oil which is now killing bird life.
The National-Act Government's response to this oil spill has been reckless. No booms to contain the spill and the Government has not taken over responsibility to salvage the ship and prevent a possible 1700 tonnes of heavy fuel oil spilling across the Bay of Plenty and Coromandel coast.
If the oil spill is contained and the ship salvaged then Aotearoa will have narrowly dodged a bullet, but if it spreads or worsens then the blame should be laid squarely at the feet of John Key, the millionaire Prime Minister, who took control of the Auckland waterfront but refused to take control of and stop an eco-disaster.
Environment National Party