A festival of defiance on Wall Street 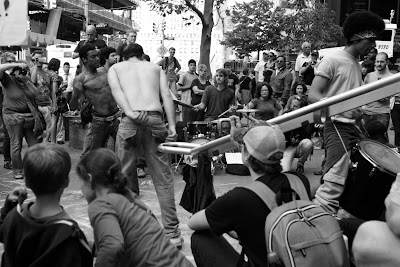 Emir Hodzic is from Aotearoa and rolls with the Unite Union. He is currently in NYC participating in the Occupy Wall Street (OWS) movement.
Day 13 of the occupation, and no signs of anyone giving up, if anything the movement is rapidly growing. The drums were beating while others were dancing, and occasionally everyone proclaimed, “Wall Street is ours!” Those that hoped this occupation would pass like a common cold, now realize they are dealing with a serious infection.

Some of us were painting posters and banners for the march, alongside kids, their parents and passers by. At times temporarily distracted by a lone voice, “Who’s square?” moments later, “Our square!” people would loudly remind the enquirer. The general atmosphere was jovial, festive, and at the same time with an air of defiance.

There were rumours that Radiohead were visiting the square, but that was later confirmed to be untrue. So far many celebrities and artists have either been here or have sent their support. Michael Moore, Susan Sarandon and Noam Chomsky, to just name a few. Radiohead weren’t visiting today, but for several thousand people present that made little difference. They were here to march in solidarity. 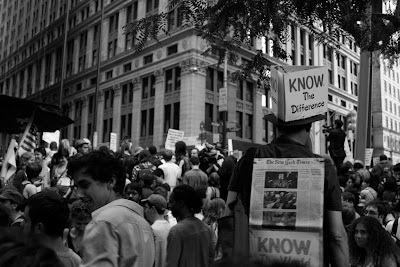 Today’s march was in response to police brutality from previous demonstrations, mainly last weekend, where scores of demonstrators were arrested, thrown and maced. It is somewhat ironic that the disproportional use of force by the police, in an attempt to intimidate and breakdown the movements resolve, has resulted in quite the opposite. Uploaded video’s attracted mainstream media’s attention and created a public outcry, resulting in more support for the movement.

Due to the sheer number of people present today, facilitators had to activate people microphone (Police will not allow the use of megaphones or other audio amplifiers). People microphone works by having groups of people repeating what the speaker said, and the message gets passed down the crowd like a sonic wave. 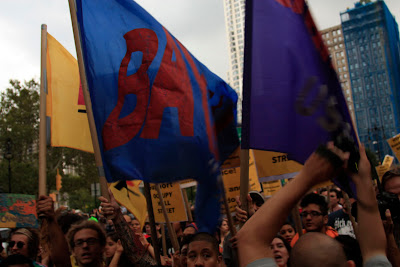 Not long into the general assembly, people mic stopped working adequately for a moment. Loud cheers and claps from the back were overwhelming the speakers at the front. I thought Radiohead had arrived after all, but the cheers were announcing the arrival of NYC Transit Workers Union (TWU). With their own banners, number of union representatives and workers were welcomed into the square.

A procession of TWU members made it to the middle, where a spokeswoman addressed the people. In reference to Wisconsin’s collective bargaining fiasco, she proclaimed “We’re in solidarity with them, and now we stand in solidarity with you!” Even before the people microphone carried her message to the back of the square, electrified crowd erupted in proclamation, “People, united, will never be defeated!”

TWU, 40,000 workers strong union, isn’t the only union that has joined the OWS movement. Many other labour unions have also announced their support. Some professors from the City University of New York, affiliated with the Professional Staff Congress union, have also joined the today’s march. “We’re here with you in solidarity,” has been a statement repeated by many today. Organised labour movements and modern youth movements, came together today as a single voice.

As several thousand people left the square and took to the street chanting, “This is what democracy looks like”, it became apparent that the police isn’t going to single anyone out with a net this time. Once the march reached the police plaza in lower Manhattan, chanting morphed into a deafening array of whistling, shouting and clapping.

The movement has already spread to other cities in the US. So far similar occupations have been announced in Boston, Chicago, Los Angeles, Washington DC, and San Francisco. OWS facilitators are hopeful that many other cities will follow.

A similar march is planned for tomorrow.

Without an end in sight, and the support for OWS growing, it is difficult to predict the exact outcome. However, one thing is sure, people are voicing their disproval of the current government and an economic system, loudly and clearly. To get to any conceivable solution, one must first recognize the problem. Or in the words of one of the OWS facilitators, passed on to me by the people microphone, “…Please join us every day, until we create a government, that is truly for the people and by the people. We are here to take the power back from the 1 percent.” 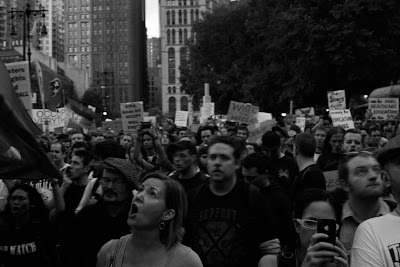