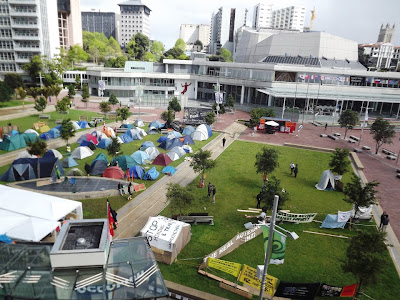 The occupation of Auckland's Aotea Square is now at day five and is growing stronger with every passing day. As the City Council threatens eviction, is this the new Parihaka?
Despite Spring storms there are more tents going up in Tamaki Makaurau as the global Occupy movement lifts the spirits of hundreds of millions around the world.
The protests have reframed the debate of the economic crisis around the greed of the 1% and derailed the political agenda of the 1% to push through austerity policies in the wake of the 2008 economic crisis.
The actions tens of thousands of people around the world occupying and defending protest camps against the 1% and the convergences of millions on October 15 around the world is shaking the ideological foundations of neo-liberal capitalism. The 1% are on the back foot, being forced to defend ideas that the radical left has for decades been attacking. Just take a look at some of the recent media coverage of the Occupy Auckland movement:

Prime Minister John Key says he has some sympathy for anti-Wall Street protesters because much of the blame for the global financial crisis can be laid on Wall Street.

However veteran activist and Mana Party Economic Justice spokesperson John Minto says Key is "one of the one percent" who control much of the world's wealth and use it to make themselves even richer.

Their comments follow protests ignited by the Occupy Wall Street movement which have spread to New Zealand.

A rejection of corporate greed and a call for the rich to pay more tax are at the movement's core.

The movement remains in its infancy and has to begin to draw in more of the 99%, especially those who with jobs, exams and commitments that prevent them from camping with the occupation. The occupation of the University of Auckland on Monday showed that the occupy movement can reinforce current struggles of the 99% and build the protest camp. A march on the downtown office of the MSC shipping company demanding full reimbursement for the Rena spill and the end of Flag of Convenience vessels on Aotearoa's coasts would be good. Actions against the imperialist wars in the Middle East, deep sea drilling and privatisation could help build the movement.
A calendar of events
A show in support of the Aotea Square Occupation
In support of the occupation of Aotea square and town centres across the globe we are putting on a free show, with performances by Tourettes (spoken word), Shit Ripper, Heart Attack Alley, Lubin Rains (The Vietnam War), Jurassic Penguin and Fire For Glory. come down, bring your tent and stay the night.
7pm, Thursday 20 October in Aotea Square.
Details: http://www.facebook.com/event.php?eid=162669420492322
The World's Final Chance- All Black Bloc vs. The 1%
This Saturday come together on Queen street for the biggest game of rugby anyone in NZ has ever seen. As a massive group of anti-capitalist rugby players we will move against the 1% (who hold most of the wealth in the world). Tiny goalposts for the 1%. Massive goalposts for the 99% the Ball is the World. IMF, World Bank and NATO referees make sure the 99% can't score.
2.30pm to 5pm, Saturday 22 October
Details: http://www.facebook.com/event.php?eid=273173149390169 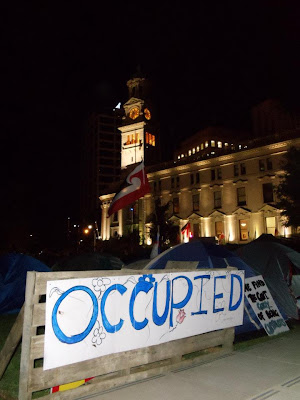 And a couple of suggestions for the General Assembly,
Saturday 29 October - #ROBINHOOD GLOBAL MARCH
On October 29, on the eve of the G20 Leaders Summit in France, let’s the people of the world rise up and demand that our G20 leaders immediately impose a 1% #ROBINHOOD tax on all financial transactions and currency trades. Let’s send them a clear message: We want you to slow down some of that $1.3-trillion easy money that’s sloshing around the global casino each day – enough cash to fund every social program and environmental initiative in the world.
Details: http://www.adbusters.org/blogs/adbusters-blog/robinhood.html
Sunday 30 October - Living wage for living dead
Assemble at camp and march on Halloween for a 'living wage for the living dead'. Raise the minimum wage to $15hr and peg it at 2/3rds of the average wage. As Unite have pointed out, "The growing gap between New Zealand and Australian wages and living standards will not be halted until working people confront the corporate vampires who have been sucking the real value from working people's wages over the last 27 years and demand a living wage for all workers." Details to come...
Saturday 5 November - 130 year anniversary of Parihaka eviction
Anti Capitalism Occupations