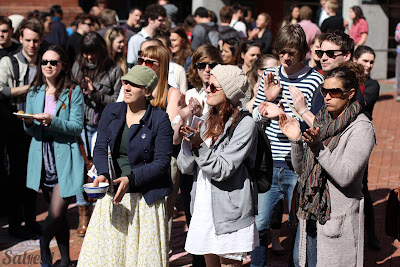 Building through practice and discussion a living, organic alternative to the authoritarian tendencies of VUW.
Students at Victoria University have started to fight the cuts and redundancies that have become commonplace over the last five-seven years.
The most recent attack that started the current fightback was a change proposal put forward by the University to radically change the focus and academic content of the School of History, Philosophy, Political Science and International Relations. The past modus operandi of VUW management has been to make some sort of half-arsed pseudo-academic or financial justification of the changes management want to make. This is window-dressing at best. What it amounts to is the domination that management have over the university as a whole i.e. staff, students and the wider community. They feel that they can change the perspective and direction of the university at their whim.
Previous management shut down the Russian Studies programme in the mid-90's, using the end of the Cold War as a justification. More recent management built some big black stone steps costing over one million dollars, the Vice Chancellor responsible was fired soon afterwards, and that is the beginning and end of his grand vision of that time. So there is a long history at VUW of various dominant incarnations of senior management feeling the need to assert 'their' 'vision' and get rid of the previous 'vision'. In effect this represents the usurpation of democratic decision-making and ownership of the university proper.
It's this situation that has been building up over the last couple of years and exploded in anger last Wednesday. VUW management have adopted harsh tactics to repress any student organising on campus. Whether this has been trespassing key activists or threatening/intimidating students with potential punishment. It reached a crescendo with VUW security's attempt to effectively stop the use of chalk to write political statements around the university, by washing them off with water as soon as the chalking appeared. They have done something similar to posters. Assuming that if they make it so labour intensive for students to organise and agitate, the barrier will be set too high for anything to happen. What this meant in practice, was that the level of anger and motivation just needed to rise higher before overcoming this barrier. 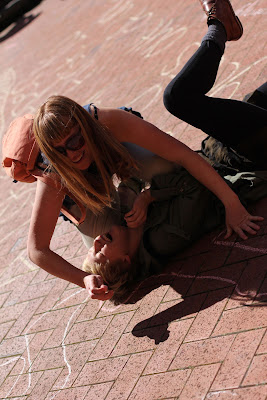 VUW have been washing away chalk protests.
This threshold was reached when 56 students met in the Student Union Building in anger at the cuts going on. A protest was organised for the following fortnight. The University’s attempt at suppressed political expression was smashed by focused, constant and decentralised chalking throughout the university. By the day of the protest, VUW security had given up on trying to stop this.
There was a highly charged peaceful protest, with security hitting and attacking students. That in itself is a manifestation of the attitude by management to students. The desire has been laid down to do more than militantly witness VUW slashing and burning. Some of the key ideas coming through in Wellington, are the need to organise to fight a long-term struggle against the whims and flights of fancy of VUW Management. As well as building through practice and discussion a living, organic alternative to the authoritarian tendencies of VUW.
-Joel Cosgrove, Workers Party Wellington
*Views expressed in this article are personal, and not representative of any groups. 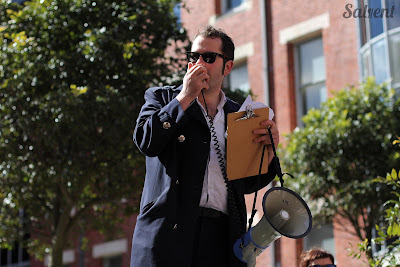