A New Zealander on the Wall Street occupation 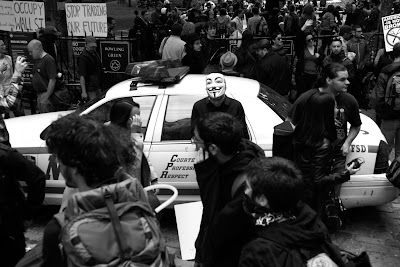 On 17th September 2011, I decided to join about 2000 people descending onto Wall Street. They called themselves the “99 percent”. People came from all over New York and other cities in the US. However, protesters were not the only ones who came to occupy Wall Streets. NYPD were there first. Hundreds of police officers blocked off parts of the Wall Street, making sure no one gets near the financial headquarters. Police even guarded the legendary raging bull!

As unemployment is climbing above 9%, and recent statistics showing that poverty is on the unprecedented rise, there is little surprise that there are angry people who feel cheated and left out. Though, it is surprising that the occupation had little or no mainstream media coverage here. Many New Yorkers probably aren’t even aware there is an occupation of the Wall Street.

Seeds, for the protest, were planted by Adbusters and Anonymous, other groups and individuals added water. Anonymous and Adbusters don’t get much exposure on local networks. Still, people came, and they are determined to stay. People have lost their jobs, they can’t afford healthcare, increasingly in debt, without any conceivable way out, resulting in feelings of utter helplessness and alienation. Yet, the elite tells them it is their own fault (John Key’s comments on poor making wrong choices come from the same script), they should get a second job, sell a kidney, or move to Mexico or something.

We are in day 10 now, and no one seems to be leaving yet. This weekend about 5 people were arrested, and 3 or 4 girls were maced by the police. Even though protests have been peaceful, the Police are trying to break demonstrators resolve through intimidation and bogus arrests (one person was arrested for taking photos!). Earlier in the week the Police threw a man over the table causing him injuries. His crime? He sat on the plastic sheet covering computers from the rain. Police called it a tent (You are not allowed to put up tents, or build structures in the park, according to some ancient law). 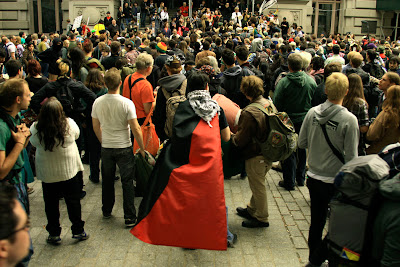 “We have problems with healthcare, with schooling, with the unemployment, we’ve had enough” said Jesse, one of the labour union organisers. I also asked him if he thinks there should be more support from labour unions for the occupation? “Initially labour unions were apprehensive over joining the demonstrations due to the confusion and lack of clarity.”
Indeed, there was no written statute, no charismatic leaders of the occupation. Organisers wanted to put it to the people to decide what the demands should be, for the people to decide what they want changed.

“However, as time went on, it is becoming apparent that we are seeing a birth of a movement.” Said Jesse, “and I believe more people will join”.

Who knows, enabled by social media and inspired by the Arab spring, maybe the necessary leadership needs to come from the people themselves. Maybe the crisis of Western democracy, and corruption of the political elite, has given birth to an organic horizontal democracy exercise on the Wall Street? Even if eventually occupation of the Wall Street ends, either through police breaking it up, or loss of momentum, we are seeing something new brewing. The fact that people are sleeping in the park (in what can be called a Capitalist Mecca) in protest to corporate greed, and are demanding change, is empowering for all those that feel powerless and frustrated in New Zealand and elsewhere. The time will tell.

Bellow is a recent letter of support by Noam Chomsky:

Anyone with eyes open knows that the gangsterism of Wall Street -- financial institutions generally -- has caused severe damage to the people of the United States (and the world). And should also know that it has been doing so increasingly for over 30 years, as their power in the economy has radically increased, and with it their political power. That has set in motion a vicious cycle that has concentrated immense wealth, and with it political power, in a tiny sector of the population, a fraction of 1%, while the rest increasingly become what is sometimes called "a precariat" -- seeking to survive in a precarious existence. They also carry out these ugly activities with almost complete impunity -- not only too big to fail, but also "too big to jail."

The courageous and honorable protests underway in Wall Street should serve to bring this calamity to public attention, and to lead to dedicated efforts to overcome it and set the society on a more healthy course. 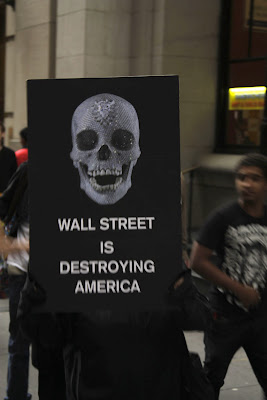