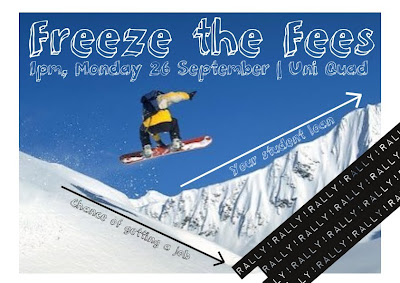 On Monday 26 September at Auckland University, Victoria University and Otago University and Polytechnic hundreds of students are expected to turn out in a nationwide day of student action.
We are the University, a group organising in Auckland has listed a number of demands.
1. STOP ATTACKS ON STUDENTS
The Act Pary's 'Voluntary Student Membership' bill will destroy student unions and services nationwide. Stop the bill before it passes on Wednesday 28 September.

3.FREEZE FEES, FULLY FUND EDUCATION
Students are burdened with tens of thousands of dollars of debt by the time they graduate. Freeze fees, cancel the debt and fully fund education.

Students from Victoria University of Wellington, the University of Auckland and Otago University have called for a Nationwide Day of Student Action on Monday 26 September.

The government is trying to dictate how students organise on campus, with so-called 'Voluntary Student Membership' set to become law on September 28. This is one of the biggest attacks on student power and unionism in recent history.

Universities are under attack from their own management, with lecturers being sacked and research shut down at Victoria University in Wellington, under the leadership of Vice Chancellor Pat Walsh.

Auckland University management, under the leadership of Vice Chancellor Stuart McCutcheon, is attempting to remove key academic freedoms from lecturers, calling into question the whole idea of the university as a community of scholars. University management is already cutting papers that encourage students studying business to think critically, things will only get worse.

Over the past few weeks, over 200 university departments have been occupied by students in Greece, whilst in Chile hundreds of thousands of students have been joined by workers striking and occupying for free, universal education, and more.

In solidarity with students both locally and globally we are going to reclaim the university for critical discussion. Rally at the University of Auckland Quad, 1pm, Monday 26 September. 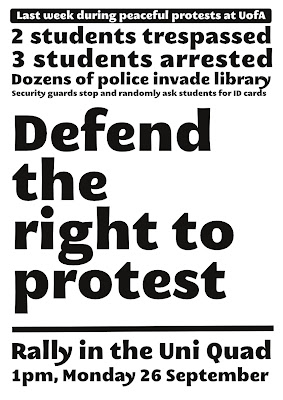