Showing posts from June, 2011
Show all

From Hibernia to Aotearoa- thoughts on the Maori and Irish struggles

Commentary- Joe Carolan, Socialist Aotearoa I first came to Aotearoa a few days before the Battle of Seattle in November 1999- I came here in love, following a green eyed Pakeha to the Waikato. Less than three months later, we were occupying the University Registry on Campus, where I had the first of many korero with Maori comrades about the similarities of the Irish and Maori struggles for freedom and liberation. Now, with the formation of the Mana Party, I thought I’d share some of those thoughts with others in the movement. The Irish, like the Maori people, love ceol, craic and Clan. That’s folksongs, fun and whanau to you. Before the invasion of our land, we were a tribal people, and although we had chieftains and “kings” of our local provinces and counties, were highly collective and egalitarian- and the Clan was the Celtic equivalent of the Maori Iwi. Not to romanticize the "Celtic Communism" of pre-invasion days too much though- we had slavery and inter Clan
2 comments
Read more

The Mana Revolution has begun

- June 27, 2011
Hone’s victory in the Te Tai Tokerau election means that the Mana Party is now the newest Party with parliamentary representation in Aotearoa. This achievement is impressive, given the range of forces ranged against us- the Maori Party, the Labour party machine, supported by the National Party, and most of the mainstream media and political commentators. Knocking on the doors out in Waitakere, the best reception I got from people was to our upfront class politics. The Maori Party had abandoned the Maori working class and poor just like the centrist Labour Party had abandoned the whole of the working class- the huge poverty and deprivation we came in contact with on the doorsteps had not just fallen from the sky a day after John Key’s electoral victory in 2008. When we argued for fighting unions, for living benefits and a living wage, for the abolition of unjust taxes like GST in favour of taxing the rich and their banks, you could see peoples eyes light up. When we talked
Post a Comment
Read more

How we beat Youth Rates Before

How we Beat Youth Rates Before by Jennifer Josling, Socialist Aotearoa Youth Rates are discrimination rates. At 16 you are free to leave high school, to work full time or to get into uni to study. At 16 Many youth need to work to survive. With the current proposition of youth wages of $8 to $10 for people ages 16 to 24, living in the current climate will be next to impossible. The government say that this will bring more jobs for youth also lower the unemployment rates of youth. That they will have more opportunities. I see this going a few different ways. Firstly, that youth get jobs but have to work many hours to survive, meaning whatever else they may need to do such as study becomes impaired, meaning that they miss out on other important life experiences and time with family and socialising.. Secondly, There will be no work for older people. A business will do what they want to maximise profits and if this means hiring low wage workers, then they will hire them over
1 comment
Read more

Equal Pay for ALL- March on the Millionaires

EQUAL PAY FOR YOUTH AND WOMEN- MARCH ON THE MILLIONAIRES! 11.30am This Saturday June 25th Assemble Holy Trinty Cathedral, 446 Parnell Road Parnell Then march on John Key’s Mansion and the Employer and Manufacturers Assocation HQ, Khyber Pass The March on the Millionaires- Equaly Pay for All- will now go from the Holy Trinity Cathedral to John Keys mansion to the headquarters of the EMA in Khyber Pass, following todays huge insult to women workers too - bring a tampon to throw at Alasdair Thompson. First youth, then women- what next, Maori rates? The Employers Association boss has defended his claim women get paid less than men because they have monthly "sick problems", have babies and need to take extra leave as the "facts of life". National and Act have signalled they want to re introduce youth rates for workers up to the age of 24 as part of their election policy. The Campaign for a Living Wage has called for a nationwide picket of National MPs offices at
Post a Comment
Read more

A guide to John Key's war on working people

Since being elected in 2008 John Key and the National Party have waged a savage war on working people. Instead of deliviring a “brighter future” of high wages and low crime, John Key’s Government has gone about enriching the super-rich elite and big business at the expense of working people. Asset sales National’s plan is to sell off 50% of the state-owned electricity companies and Air New Zealand if they win this year’s election. Selling the electricity companies will inevitably lead to higher electricity prices, less revenue to pay for public services and corporate control of the energy market. Electricity is a public resource and as socialists we don’t think anyone should make a private profit everytime we turn on a light or boil a kettle. No wonder 2/3rds of us oppose asset sales. Health privatisation In Queenstown the National Government are planning on selling off the public hospital and health facilities and replacing them with corporate healthcare on contract to the Go
Post a Comment
Read more

United against the millionaires- no return to the 1990s 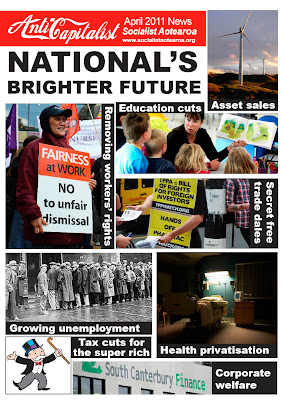 John Key's National Government is sticking the boot in. Real wages drop. Unemployment rises. Health and education standards drop. There is money for tax cuts for the rich, for holiday highways, for party central (WTF?), for SAS murderers in Afghanistan but no money for Auckland's rail, for RadioNZ, for solo-mums bringing up kids, for public sector workers to get wage rises. The biggest economic crisis since the 1930s. Banks collapse and they get bailed out. Companies ship factories to third world countries, skilled workers leave for Oz, farms get bought up by rich corporations here and abroad, slave labour conditions for workers on our vineyards and on fishing vessels, the prisons fill day by day with angry youth. Meanwhile as Christchurch tries to recover the government lets a natural catastrophe become a social disaster. We put GST up by 2.5% but where's the money for jobs, for warm homes, for safe infrastructure? The environment is hurting. Our rivers are toxic, our
Post a Comment
Read more

Huge crowds celebrated on the streets of Yemen on Sunday after president Ali Abdullah Saleh fled to Saudi Arabia—saying he needed medical treatment. “The people have brought down the regime,” chanted the crowds in University Square at the heart of the capital, Sana’a. Protesters have renamed it Change Square and camped there since February. Saleh, who has held power in the country for 33 years, was injured in an attack on the presidential compound on Friday of last week. Other leading members of his regime were also hurt. Throughout Friday and Saturday, members of Saleh’s regime insisted that the injuries were minor. However on Sunday morning it was announced that Saleh had left to have surgery. Although Saleh’s supporters still say he will come back “in a few days”, that was looking increasingly unlikely. “The squares have been filling up with people celebrating, and that in itself makes it harder for the dictator to return,” Abubakr Al-Shamahi, a Yemeni activist base
Post a Comment
Read more

Annette Sykes speaks on Mana, Tino and the Working Class

Annette Sykes, one of the leaders of the Mana Movement, discusses the relationship between Maori, Tino rangatiratanga and the working class, at the Workers Party conference in Hamilton.
Post a Comment
Read more
More posts