Showing posts from April, 2011
Show all

Socialists support the birth of the Mana Party

Up to 500 Maori, environmental, anticapitalist and socialist activists came together at Mahurehure Marae in Auckland today to tautoko the launch of New Zealand's newest political party: Te Mana The atmosphere of optimism and determination from the assembled supporters was echoed from the platform, with an impressive array of speakers lining up to explain the importance of fighting back against Act, National and Labour's support of big business at the expense of ordinary people. Tonight 's TV headlines all focus on Hone's call for a by-election in the Te Tai Tokerau electorate. This is important as it recognises the need for a democratic mandate for Te Mana. But more crucial is the platform upon which the new party has been formed. Te Mana is calling for the nationalisation of power, water, and housing, and an end to the sell-off of state assets. It demands the end of the 90-day slave labour law where people can be fired by their bosses at will. Hone outlin
Post a Comment
Read more

MARCH FOR SOCIAL JUSTICE. John Key is not working for New Zealand. A new Coalition of community groups, people from religious organisations and unions has been formed. Our slogan is Social Justice (meeting occurred on the 29th March 2011). Our aim is to challenge the policies of John Key and his National led coalition.We believe they are not serving the interests of the majority of New Zealanders. We are organising a MOBILISATION of ordinary Kiwis on SUNDAY 1ST MAY. Also more action when National announces the BUDGET on 19th May 2011. Throughout the world ordinary people are challenging the Free Market prescription from government cuts to privatisation/asset sales. New Zealanders are angry about GST, milk prices and secret Trade deals, cuts to Early Childhood education and privatisation of electricity. Meredydd Barrar, spokesperson says, "Enough is enough. Recent government announcements about cuts and a Budget that will certainly condemn the majority of New Z
Post a Comment
Read more

An Open Letter to all Unionists and Fighters in Aotearoa

AN OPEN LETTER TO ALL UNIONISTS AND FIGHTERS FOR EQUALITY AND SOCIAL JUSTICE IN AOTEAROA Dear friends, I am writing to urge all supporters of genuine left politics to support and if possible participate in the new Mana Party led by Hone Harawira to found a new movement for radical social change in Aotearoa/New Zealand.The Mana Party is being launched this Saturday, April 30, from 12 noon at the Te Mahurehure Marae, 73 Premier Ave, Point Chevalier, Auckland. This party is a product of the protracted struggle over the last decades to achieve an independent voice for the interests of Maori people in Aotearoa/New Zealand. That struggle exposed a rift that has seen a the Maori Party captured by pro-corporate elite more concerned with protecting the interests of the wealthy against the interests of the vast majority of people in Aotearoa/New Zealand – whether Maori, Pakeha, Pacifica or Asian.The Mana Party is determined to continue to be the voice of the majority of ordina
Post a Comment
Read more

Commentary: Shiv Ganesh, University of Waikato National Party MP Katrina Shanks announced in parliament yesterday that "It is really important to remember that file sharing is an illegal activity." Actually, Katrina, it’s not. And this poorly conceived new bill that was bounced into law yesterday makes it possible to punish file sharers before copyright violation has even been established. It’s perfectly appropriate to ensure we have a mechanism to protect the intellectual property rights of the creative classes in this country. However, it’s critical that we establish that violation has in fact taken place, but the new bill makes it possible for copyright holders to apply to shut down an alleged offender’s Internet account without any burden of proof! It’s especially sickening that this bill was bounced into law yesterday under cover of Parliamentary Urgency, which was designed for the passage of important earthquake relief legislation. The only connection t
Post a Comment
Read more 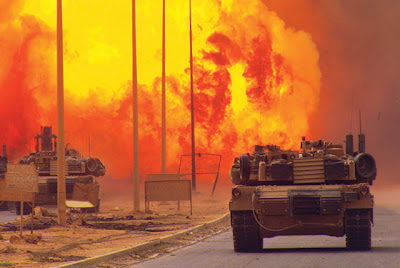 Iraq war: A coup against Empire? The argument concerning the decline of the Nation-state and the rise of a so-called international super-state is one which has caused debate amongst socialists for decades dating all the way back to Lenin and Kautsky. However, in more recent years the debate has come into even greater prominence, the argument for such a claim spearheaded by Michael Hardt and Antonio Negri. The pair’s trilogy, Empire has received widespread acclaim even being hailed as ‘the Communist Manifesto of the Twenty-First Century.’ The aim of this article is toneither argue for nor against rather give the reader a general overview of the ideas expressed in Empire. Hardt and Negri’s argument to why the capitalist geopolitical sphere has only developed a global super-state is simple and rests dominantly on one point: the effects of the globalized economy. No one today can deny these effects, national markets are so intertwined that it is very seldom said that a country is in
Post a Comment
Read more

The story behind the Porirua floods 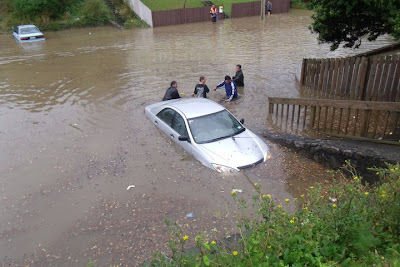 On March 27 2011, Wellington, in particular the working class area Porirua experienced some heavier than normal rainfall. Apparently it was a 1 in a 100 year storm with 40mm of rain falling within an hour. This particular day I was meant to go to a meeting in Wellington city, I got ready, left home around 12:40pm. It was raining, quite hard but rain like that is somewhat expected at this time of the year. I dropped my flatmate at work and as I was driving past the BP in Porirua, the water level would have been close to the top of my wheels. It was at that point I decided to go home as I didn’t want to drive to Wellington with so much flooding around. When I got home however I was in for a major shock. In the 25-30mins I was away from my house the water level had gone from nothing to at least waist deep. My parents Toyota Camry, which is normally parked right next to my car was floating in water which was at its door handles. At the deepest level that I know of, water was approx 1.5me
1 comment
Read more

Operation 8: Deep in the Forest 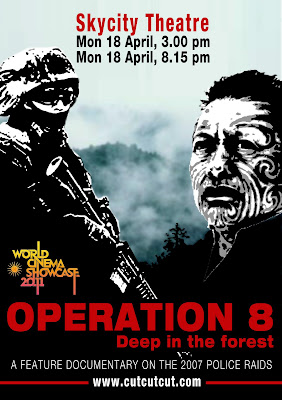 A feature length documentary on the 2007 police raids. Brian Rudman: Urewera decision fans the flame The court's backing of a judge-alone hearing threatens the sanctity of the jury system, writes Brian Rudman. Last week the Court of Appeal upheld Justice Helen Winkelmann's decision to deny the 18 people arrested during the 2007 Urewera "terror" raids a trial by jury. Their trials, scheduled for late May in Auckland, will be heard before a judge alone. We don't know why, because publication of the reasons behind both decisions is banned. All we can go on is the change of law in 2008, which allows a judge to rule that a case be heard by judge alone in cases which are likely to be long and complex and cases in which there is a significant risk of jury intimidation. Whatever the reasoning behind Justice Winkelmann and the Court of Appeal's decision, the result is to add fuel to a political bushfire that has been flaring since more than 300
Post a Comment
Read more

The return of the Arab revolution

by Alex Callinicos for the new International Socialism Journal 130 In the winter of 1939-40 the German Marxist critic Walter Benjamin wrote a remarkable text known as “Theses on the Philosophy of History”. In it he attacked the widespread belief on the left that socialism would come about inevitably, as the fruit of historical progress. “Nothing has corrupted the German working class so much as the notion it was moving with the current,” he wrote. Revolution is not the appointed result of humankind’s “progression through a homogeneous empty time”. Rather, “it is a tiger’s leap into the past,” which mobilises the memories of past suffering and oppression against the ruling class. And Benjamin concluded by evoking the fact that, in the Jewish Messianic tradition, “every second of time was the strait gate through which the Messiah might enter”. 1 Revolution, in other words, is not a predictable outcome of a forward historical movement—it is a sudden, unexpected irruption into a histo
Post a Comment
Read more
More posts