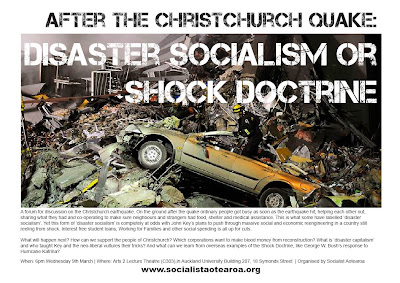 "After the Christchurch Quake - Shock doctrine versus Disaster socialism"

The people of Christchurch are organising their own forms of mutual aid and co-operation after the quake while the politicians and corporations hover like vultures attempting to profit from the disaster.
...
Come along and discuss the situation in Christchurch after a panel of speakers on what the political fallout is from the earthquake.

In the aftermath of the terrible disaster of the Christchurch earthquake two things have happened.

On the ground after the quake ordinary people got busy as soon as the earthquake hit, helping each other out, sharing what they had and co-operating to make sure neighbours and strangers had food, shelter and medical assistance. This is what some have labelled 'disaster socialism'.

Yet this form of 'disaster socialism' is completely at odds with John Key's plans to push through massive social and economic reengineering in a country still reeling from shock. Cuts to Working for Families, interest free student loans and attacks on the unemployed and welfare recipients are in the works. This "Shock doctrine", is a corporate formula to use disasters to make a profit or kick the poor.

The Battle of Christchurch has begun. Now is the time for the left to organise and fightback against the neo-liberal plans to turn the reconstruction into blood money.